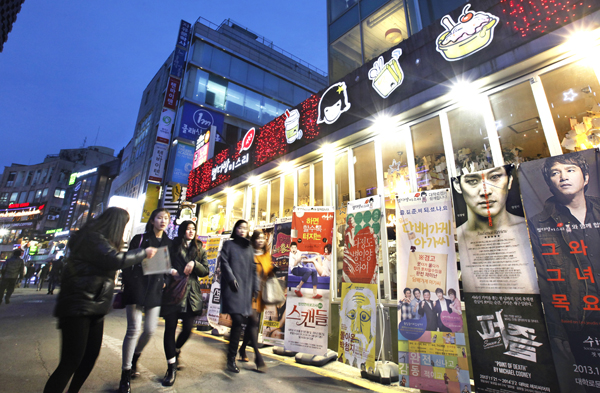 Although Daehangno is regarded as a mecca for small theaters, locals don’t often go there unless they can find cheap deals on social commerce websites. By Park Sang-moon

A portal to another world lies just one stop away from the Dongdaemun shopping district on line No. 4.

The stop is Hyehwa Station and the district is Daehangno, or University Street, named after Seoul National University, which was based there until it moved to Gwanak District in 1975.

Although the academic institution is long gone, the neighborhood has since reinvented itself as a hub for small theater productions. Currently home to some 160 theaters on the alleys along the 1.6 kilometer-long (1 mile-long) road, Daehangno could easily give Broadway and the West End a run for their money.

Each decade and a slump in the economy has brought new challenges for the district, but recent threats have come in the form of social commerce websites and the rise of bigger productions. But despite the changes, industry insiders are finding ways to stay in the competition.

“There’s nothing quite like it,” said Yoon Min-sik, producer of the open-run musical “Love on the Bench,” which is about an older married couple who reminisce about their youth while sitting on a bench.

It is indeed rare to find a district like Daehangno that boasts smaller theaters with about 70 to 250 seats, which gives the audience a more intimate experience than they can get at a bigger theater.

Yoon, who has been in the industry 12 years, said it’s the sense of realism and being able to see every little detail onstage at an affordable price that lures people into small theaters.

“Many people say that Daehangno is under threat, but the fact is they’ve been saying that ever since I started working here,” Yoon said in response to media reports that the industry isn’t faring too well.

But after a decade there, and with more small theaters than ever before in the district, Yoon said he foresees tough times ahead because “the audience numbers aren’t increasing with the number of theaters.”

“The supply outweighs the demand threefold,” said Yoon, who believes that some theaters will probably have to close their doors at some point if they fail to draw in more people. 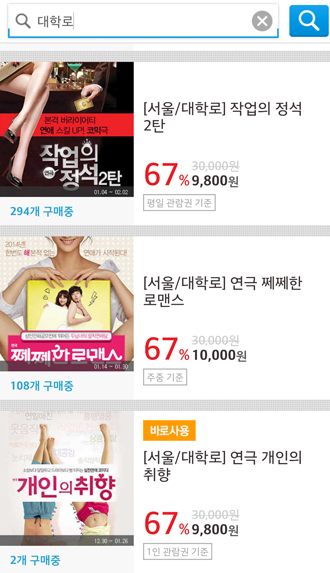 Most of the productions on social commerce websites are those of a raunchy nature. [Screen capture]

But even with the odds against them, there are those still jumping in.

Someone who’s experienced firsthand the harsh reality of producing a musical in the saturated market is Park Kyoung-won, producer of “Election! - For My Vietnamese Wife.” As a longtime musical enthusiast with some experience running fashion shows, Park plunged into the arena with an original musical in 2012.

Park’s show tackles issues concerning multicultural families, the super-aged society - in which people 65 and over account for 20 percent of the population - and the disadvantaged in a humorous way.

“I thought if the work was excellent, that’d be enough,” she said.

From a lease fraud to missing the crucial marketing season to the lack of an audience, Park said everything that could go wrong did.

“One time, we had nine actors onstage and eight audience members,” said Park, adding that even with a social media specialist, it was hard to get the word out and for the public to notice.

“I heard that it was tough, but I had no idea,” said Park, who had heard that the first three years for an original musical was hell.

And with the second season in Daehangno looming around the corner, she said although she is “scared,” this time she is mentally prepared for what’s to come.

While the four-month stint in Daehangno saw Park dig into her own pockets to pay her staff, some good came out of it, too. The musical was credited as an Outstanding Performance by the Korean Cultural and Arts Centers Association, which meant the show could go on tour around the nation with the government footing half the bill. But despite their triumphs, Yoon and Park are the exceptions rather than the rule; they pick quality productions over the ones with mass appeal.

Both musicals are popular with older audiences, have casts with a diverse age range and are reliant on word of mouth rather than social commerce websites to drive sales.

Last month, the Seoul Theater Center released a report that surveyed the habits of Daehangno visitors since 2012. The report found that the district has come to focus less on artistic endeavors and more on popular works that are easy to understand and appeal to the young with hints of sex and romance. While this may suit the target audience - those who are in their 20s - individuals within the industry are suffering from this focus.

Lee Seong-wook, who has been acting for 10 years and is starring in “Where Is My Family?” said that as much as he loved his job, the lack of quality productions was frustrating as a performer.

“These days, the popular works are the lighthearted ones,” said Lee, adding that he missed the times when he’d catch a show, and although it wasn’t “really funny or entertaining,” he’d feel “something warm and fuzzy.” Productions like that are hard to come by these days.

“Even with a drama, we have to somehow incorporate humor into it,” said Lee.

“Romantic comedies are what women in their 20s want,” explained Yoon, who said this accounted for the countless productions offering tickets online. But many wonder whether the findings are a true reflection of what people want or a natural consequence of producers’ pursuit of money.

“I was surprised to see the reports,” said Park. “A lot of older folks enjoy coming to a show, too,” said Park, adding that her audience consisted of all ages, which made her wonder if there was a lack of productions targeted toward adults that make people shy away from the district.

Yoon has felt the same way for some time, and that’s why he has chosen to get behind the musical about an older couple.

“At the moment, Daehangno revolves around 20-year-olds and there is a lack of diversity,” said Yoon. “I guess that’s where I saw my niche.”

Although he knew that younger audiences may not find the plot riveting, Yoon said he knew that if everyone in the older age bracket came to see the show, it would be worth a shot. The tickets also cost 40,000 won ($37), not cheap by Daehangno standards. Rather than offering competitive prices through websites, Yoon said he waited for word to spread. While his patrons are not exactly tech-savvy, he found that if one of them told his hiking group about the show, it had a snowball effect.

Left: A scene from “Love on the Bench,” in which an older married couple reminisces about their youth. Right: “Election! - For My Vietnamese Wife,” which is set in a small town, is a hit all across the country. Provided by the producers

According to the STC, about 80.5 percent of the tickets to hit shows were sold online, and most people paid 15,710 won per ticket.

Lee said if one company increases the price, then the others have no choice but to follow suit.

“It’s not the best solution,” Lee said, “but for now there seems to be no other way.”

And although Park initially saw advertising and sales on a social commerce website as a possible solution, she was told that the waiting list to secure a spot on the site was a lengthy process and reserved for “popular” shows, not original pieces without a following.

“With the social commerce website sales, there is virtually no profit,” said Choi Yoon-woo of the Korea Small Theater Association. But there are exceptions reserved for heavyweights.

“The way that the theater world works, the start-up cost is the most expensive, so if a production has been running for more than six months, then there is some chance,” said Choi. “So, essentially, the bigger productions on an open run only benefit from it.”

But as a typical Daehangno production runs for just three or four weeks, there’s no way to win for smaller companies that are just starting out.

Choi said social commerce websites are no help for theaters with fewer than 150 seats.

“If you think about it, to make a profit, you have to lower your expenses,” said Lee, adding that it wasn’t uncommon for companies to recruit younger, less experienced actors for lead roles in order to make some money from cheap ticket prices. Many new actors are happy to accept less than 50,000 won per show, while those playing minor characters may be paid even less.

“There is an unsaid agreement between the theater and the patrons who bought the tickets for cheap,” said one source who requested anonymity.

“The show will go cheap on the lights and the stage, and cram as many people in there as possible. And the patrons - although packed in there like sardines - are happy to comply,” he said.

This may explain why the STC reported a 60 percent capacity rate on average for a Daehangno show, but it is a number that can be deceiving.

Lee said that while cheap tickets may be necessary for survival, he wondered if there wasn’t another way. “Instead of devoting efforts to get people in the door, I wish they’d focus more on the quality and making the show enjoyable,” he said, but he admitted, “I’m no producer, so the way I view the theater world may be different.”

But even with the social commerce debate aside, there are other roadblocks remaining in the cramped market. The rent is forever skyrocketing - taking up about 50 percent of expenses, and then there is the matter of bigger competitors.

“Last year alone, we had a lot of licensed musicals from abroad playing at bigger venues,” said Yoon. “And of course when they come, the press and the people all pay attention to them first.”

Yoon said one of the reasons Daehangno is suffering is because one show in a large theater with a capacity of 2,000 is equal to about 10 shows in Daehangno.

But tangible problems aside, sometimes the public is the problem.

“People don’t want to come to Daehangno because they think it’s far, there’s no parking and the list goes on,” said Park.

“They also think that a small theater production might be lame, boring and probably not as good as foreign productions,” said Park, admitting that she used to think that way herself before she set foot in the industry. “But once they come, they always say how surprised and blown away they are by the productions.”

And once they’re hooked, it’s not unusual for these patrons to come and watch the show again and again, which is what Park calls a “revolving door.”

“The intimacy, the way that the actors and audience can communicate, that’s what’s so attractive about small theaters,” said Lee, adding that despite the instability, he couldn’t walk away for those reasons.

“The fan culture is great, too. I have fans that I keep in contact with, and it’s such a rewarding feeling,” said Lee.

“Of course, it’s good to watch a big production, but how often can you relate to some of these grandiose characters in foreign productions?” Park said. “Most works in Daehangno are written by local writers, so it makes sense that people can relate to them better.”