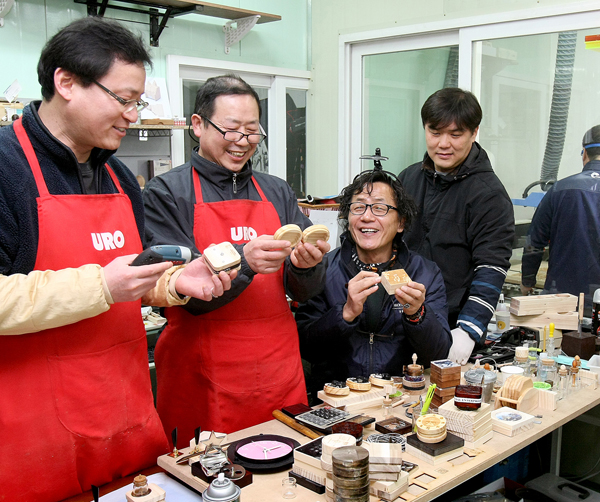 Lim Jeong-man, second from right, discusses items to be submitted to a contest with his employees, formerly homeless people, at his Neulpum Workshop. By Gong Jeong-sik

Lim Jeong-man, a 54-year-old craftsman, has brought a few homeless people back into society, giving them the opportunity to work again. The charity cases, who used to live on the streets, are now going into the first Lunar New Year holiday since returning to their normal lives.

Lim, a former silver workshop crafts school owner, was a volunteer at the Dongdaegu Homeless Center in Daegu. He was happy to help the less fortunate, but he also started to believe that more could be done than just providing food and shelter. He suggested that the center start a company to help rehabilitate the homeless.

“During my six years of volunteer work, I witnessed homeless people living from hand to mouth every day by working as day laborers or by begging,” says Lim. “I thought establishing a company that keeps them working would be a great idea.”

Dongdaegu Homeless Shelter provided its basement for factory operations, and the Daegu city government chipped in 100 million won ($93,984). The center pulled together a workforce of 20 homeless people.

That’s when good intentions crashed into the hard reality of helping the homeless.

“It wasn’t an easy start,” Lim admits. He had to teach the workers everything in detail, which he expected. What he didn’t expect was that the homeless workers were not used to working anymore. They fought among themselves and disappeared during work hours.

The choice of products was also faulty and orders didn’t come in. The venture ran out of the money from the local government at the end of last year. Sixteen of the 20 employees walked away from their jobs.

Then Lim had an idea. He decided to focus on a very specific niche market. He suggested making items stamped with the word “Dokdo.” He realized there were countless seminars and official pow-wows about Korea’s easternmost territory and that the souvenirs sold at them were cheap products made in China.

Lim’s four remaining workers decided to give his idea a shot and they worked without being paid.

The idea of sourcing Dokdo islets merchandise from a Korean manufacturer appealed to organizations, including the Anyongbok Foundation. Orders for the past two months totaled about 4 million won. The group of five are now working from 9 a.m. to 4 p.m. each weekday to complete a 1 million won order of wooden pencil cases with Dokdo’s name carved on them.

The employees say they are grateful to be able to send presents to their families for the Lunar New Year, one of the biggest holidays in Korea. The company still cannot afford regular wages, but it expects to pay a 400,000 won bonus to each employee on Jan. 25.

“I still cannot go home, so I’m going to buy a box of fruit with my bonus and send it to my family,” says one of the employees, identified only by the surname Kim.

Kim used to be homeless and lived around Dongdaegu Station for about two years. He came to the homeless center last August.

When the company is finally able to pay wages, the workers say they will spare some of the money to help needy neighbors, especially for school supplies for the children. They are also planning to give donations to the Community Chest of Korea.