Ross’s career high not enough to save Raptors

Ross’s career high not enough to save Raptors 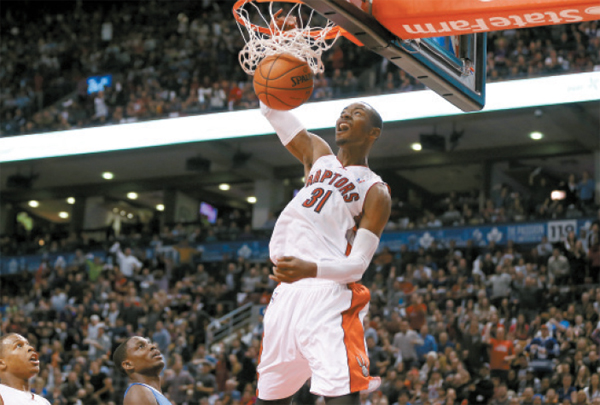 Jamal Crawford had a season-high 37 points and 11 assists, and the Los Angeles Clippers overcame Terrence Ross’s 51 points to beat the Toronto Raptors 126-118 on Saturday night.

Ross’s big night wasn’t enough for the Raptors, though.

Blake Griffin scored 30 points and J.J. Redick had 18 as the Clippers won for the 10th time in 13 games and snapped a four-game losing streak in Toronto. Los Angeles improved to 8-3 without star guard Chris Paul, sidelined with a separated shoulder.

Darren Collison added 12 points and Matt Barnes 11 for the Clippers.

Jonas Valanciunas had 17 points and 12 rebounds, Kyle Lowry added 11 points and 12 assists, and DeMar DeRozan scored 10 points before leaving with a foot injury as the Raptors lost for the first time in three games.

DeRozan sprained his left foot when he landed awkwardly on Hedo Turkoglu’s leg after attempting a jump shot with 7:53 remaining in the second quarter. DeRozan stayed in the game but was replaced with 2:58 left in the half and headed to the locker room for treatment. He started the third but left again at 10:06 and did not return.

Bothered by back spasms, Redick was limited to two points in 4 minutes of action in the first half but returned to shoot 6 of 11 in the second half.

Toronto led 107-106 on an alley-oop dunk by Valanciunas at 6:36 of the fourth. After a Clippers timeout, Redick hit a 3-pointer, Collison made a jumper and Redick connected again, putting Los Angeles up 113-107 with 5:09 remaining.

Valanciunas stopped the run by making one of two at the line, but Griffin hit back-to-back jumpers to put Los Angeles up 117-108 with 3:56 to go.

Ross matched a Raptors record for 3-pointers in a quarter by making five in the first, with a buzzer-beater giving Toronto a 37-36 lead after one.

Ross made two more from beyond the arc in the second, setting a team record for 3-pointers in a half, but Crawford had 15 points for the Clippers, who led 71-65 at halftime.