When Porsche decided to release its Cayenne sport utility vehicle, there were concerns that the renowned German automaker was ignoring its sports car DNA. Similar questions were raised when it introduced the four-door Panamera sedan.

But these two models have been successes for Porsche, and the Korean market is no exception. According to data from the Korea Automobile Importers and Distributors Association (Kaida), Porsche sold 2,041 units last year, up 34.6 percent from a year ago. More than 70 percent of Porsche sales in Korea are either Cayennes or Panameras.

This may be a disappointment for avid Porsche lovers who think of sports cars like the 911 Carrera or Cayman when they dream about the brand. But the Cayenne and Panamera are definitely Porsches, and they are an interesting mix of robust sporty performance and comfort. And when I cite comfort, I include basic features such as cargo spaces and various touches of luxury.

The Porsche Panamera Turbo Executive is a model that really mixes things up.

The name gives a number of clues. The word “Turbo” means that it gives a good performance, with a turbo-charged engine, and “Executive” signals that luxury is going to be a given.

In short, the Porsche Panamera Turbo Executive is a car for company owners or the kind of rich people who have their own chauffeurs. In the past, the chauffeur-driven car segment was represented by the Mercedes-Benz S Class, the BMW 7 Series and the Audi A8, but Porsche has entered the market with its typical sporty nature.

The new Panamera, which is a face-lifted version of the original Panamera from 2009, was introduced in Korea last September. However, the Turbo Executive really stands out from other Panameras. 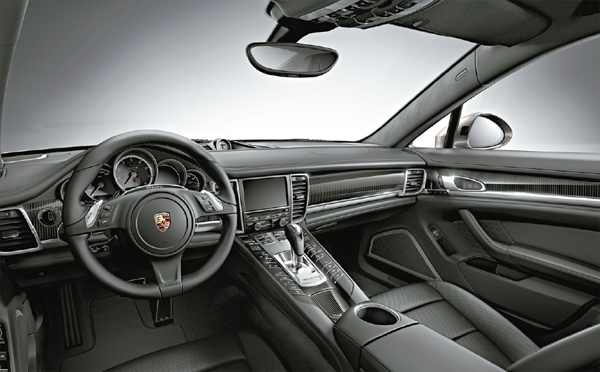 The interior of the Porsche Panamera Turbo Executive. Provided by the company

Generally, when people see the new Panamera, many will recognize that this is a car from Porsche because of its trademark “frog eye” headlights, although the design has changed a little bit because of the use of LED lights. At the same time, people will be curious about why Porsche has produced such a large four-door sedan, especially with the Turbo Executive, the largest Panamera out there.

The vehicle’s 5.16 meters of length (16.9 feet) and 1.93 meters of width is intimidating, especially when driving down narrow lanes or parking, although it has a good parking assistant system that includes 360-degree cameras.

Unlike other luxury sedans, the backseat of the car has been replaced with bucket seats, which are the hallmark of sports vehicles. Since the center console of the car goes down the middle, there is no space for a third person in the back.

Various function controllers are in the console. You can make the backseat as comfortable as you like with the controller. There are also sun blinds, heating and cooling systems for the seats, and a monitor is installed behind the front seat’s head rest. The lighting in the back seats is exceptional, making it very easy to lean back with the Wall Street Journal or The Economist. 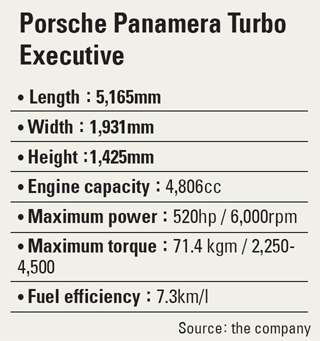 To start the engine, the driver has to turn a key on the left side of the steering wheel as in other Porsche models. What comes as a surprise is the robust engine sound coming from the 4.8 liter V8 bi-turbo engine.

The engine speaks of the power of this car. It produces 520 horsepower, which is 20 horsepower more than previous Panamera Turbo models, and its maximum torque is 71.4 kilograms (157 pounds) per meter.

The car’s weight is more than two tons, but with these engine specs it goes from zero to 100 kilometers (62 miles) per hour in just 4.2 seconds, according to the automaker. In fact, it was actually scary for me to hit the gas pedal because the car reacts so quickly in order to generate speed. The maximum speed is 305 kilometers per hour.

Even though it is designed to be chauffeur driven, the Panamera Turbo Executive keeps the sporty DNA of Porsche and it’s fun to drive. If you need more power and instant speed, there are sport and sport-plus modes that will change the suspension settings and even the sound of engine. All of these changes can be made by pushing a button at the side of the 7-speed gear box. The handling and steering is also what you can expect from Porsche. Since this is a big car, it won’t be quite as fleet of foot as the 911 or other smaller Porsches, but it’s still highly impressive compared to other large sedans out there.

The combined fuel efficiency of the vehicle is 7.3 kilometers per liter, but I guess if you have the money to buy this car then the gas price won’t be a big concern - the price of the basic Panamera Turbo Executive starts from 256.9 million won ($242,000), and the Korean Package, which includes more features, is nearly 300 million won.

Porsche was known to be targeting rich Chinese customers, who usually go for big fancy cars, with the Panamera Turbo Executive. But whatever the reason this car was born, it combines the DNA of a sports car with luxury.