In new project, western island will be revamped

In new project, western island will be revamped 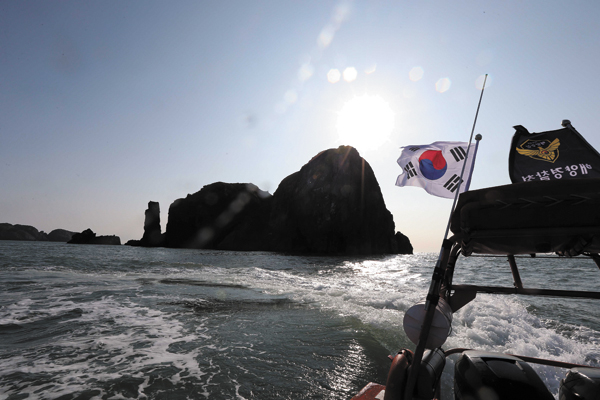 Just a mere 55 kilometers, or 34 miles, from the shores of Taean County in South Chungcheong, lies Gyeokryeolbiyeol Island, an uninhabited land mass that serves as the nation’s westernmost border outpost. Because of its geographical significance, this unmanned island is often referred to as the Dokdo of the West Sea.

Yet it is also the place where a flock of Chinese fishing ships have frequently been seen trespassing and illegally fishing - acts that have sparked tension recently with the patrolling Korean Coast Guard and reignited long-standing territorial concerns.

More than 60 percent of illegal fishing by Chinese fishermen takes place in waters near Gyeokryeolbiyeol, according to the Coast Guard. As of 2012, approximately 1,685 Chinese fishing ships were caught fishing in Korean territorial waters near the island.

“The Navy and the Coast Guard are keeping a close eye on possible illegal fishing by the Chinese. But given the vast area we have to cover, there is a limit to our monitoring capabilities,” said Capt. Sang Byung-yong, of the Navy’s 320th vessel.

But after two decades left the island uninhabited, a new government initiative will once again have people roaming the hills of Gyeokryeolbiyeol. As part of the new 1.5 billion won ($1.4 million) project, which was approved by the National Assembly, workers from the Ministry of Oceans and Fisheries will be stationed on the island to monitor activity and refurbish a dock that has remained untouched for the past 20 years.

The dispatched personnel will be responsible for guarding Korean territory, with the island once again “serving as an important outpost of our sovereignty,” Sang said.

The government’s decision came after Seoul and Beijing failed to reach an agreement over the boundaries of exclusive economic zones (EEZ) in the West Sea since the first round of talks began in 1996. If Seoul were to accept Beijing’s demand, China’s EEZ would overlap with areas covered by Korea’s air defense identification zone (ADIZ).

As a result, momentum to use the westernmost island as a border outpost gained unparalleled support. The resulting 1.5 billion won budget will go toward the construction of lodging and a helicopter landing pad.

When the JoongAng Ilbo visited Gyeokryeolbiyeol on Wednesday after an hour-long boat ride from Taean, a 1,500-ton naval ship could be seen facing west, as if looking for any sign of looming Chinese vessels. After docking, a staff writer walked about 15 minutes to reach the island’s 100-meter (328-feet) peak.

At the summit stood an empty building, apparently used for shelter. The last person who lived here to monitor the border - and who most likely used this empty lodge - was withdrawn in 1994, when the government of Kim Young-sam was pursuing “smaller government” and downsizing government positions in remote areas.

“From the perspective of national security, Gyeokryeolbiyeol Island holds as important an implication as Dokdo,” said Sung Woan-jong, who represents Taean and Seosan in South Chungcheong.

He added that three officials from the Ministry of Oceans and Fisheries will be stationed on the island to serve as territorial keepers.