Ready or not, Sochi to welcome world

Ready or not, Sochi to welcome world 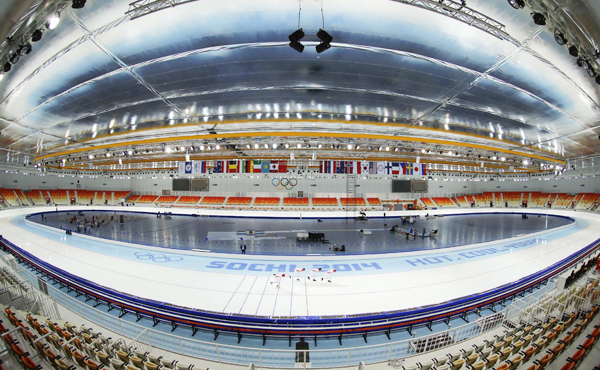 Speed skating races during the Winter Olympics will take place at Adler Arena in Sochi, Russia. Koreans have had a lot of success in short track in the past, and they’re looking to win several gold medals during the Games. [AP/NEWSIS]

The biggest winter sports event in the world begins tonight. The opening ceremony of the 2014 Sochi Winter Olympics is at 8:14 p.m. on Friday, local time - or 1:14 a.m. on Saturday in Korea - at Fisht Olympic Stadium in Russia. The beginning time, 8:14 or 20:14, represents the year the event is held, according to the organizing committee.

From Friday to Feb. 23, about 2,500 athletes from 88 countries will compete for 98 gold medals in 15 winter sport disciplines, including skating, bobsledding and skiing.

Russia is spending about 56 trillion won ($52 billion) to operate the Games, the most expensive in Olympic history. The organizing committee hasn’t released details of the opening ceremony, but there is speculation that it will contain some surprises.

Many influential world leaders, including UN Secretary General Ban Ki-moon and Chinese President Xi Jinping, will attend the ceremony, but President of the United States Barack Obama and German Chancellor Angela Merkel said they will not be present.

Local media outlets have reported that the opening ceremony will be based on three themes; the Russian emperor Peter the Great; Nikolai Gogol’s novel, “Mertvye Dushi,” (or “Dead Souls”); and a series of Russian folktales. Artists including conductor Valery Gergiev, violist Yuri Bashmet, prima ballerina Ulyana Lopatkina of the Mariinsky Ballet Company and pianist Denis Matsuev will also have roles, along with a choir consisting of more than 1,000 children and dancers.

Korea has sent 71 athletes to compete in 14 of the 15 winter sport disciplines, except for ice hockey. Veteran speed skater Lee Kyou-hyuk, 36, will be the flag bearer. Korea is aiming to win at least four or five gold medals in order to finish in the top 10 of the medal count for the third Winter Olympics straight. In order to accomplish that goal, female athletes are expected to lead the way.

Kim Yu-na, 23, the defending women’s figure skating champion, aims to skate into retirement with the best possible outcome. She injured her right foot in September but made a huge comeback by winning the Golden Spin of Zagreb that was held in Croatia in December. If she wins gold in Sochi, she will be the third female skater to win two Olympics in a row, after Sonja Henie of Norway (1928, 1932, and 1936) and Katarina Witt of East Germany (1984 and 1988).

Kim will perform her short program on Feb. 19 and her free program the next day. She will arrive in Sochi on Feb. 12.

Speed skater Lee Sang-hwa, 25, who holds the world record in the women’s 500 meters, is another defending Olympic champion. She’s aiming for her second gold medal, after winning her first in the 2010 Vancouver Olympics. In the Speed Skating World Cup held in Salt Lake City in November, Lee set the world record with a time of 36.36 seconds. She will race on Feb. 11.

In short track speed skating, an event in which Koreans have been very successful, rising star Shim Suk-hee, 17, is aiming to set a new standard. Shim won gold medals in all 10 of the Speed Skating World Cup competitions held by the International Skating Union during the 2012-13 and 2013-14 seasons. And with Wang Meng of China, who won three gold medals in Vancouver, sidelined by injuries, Shim has a strong chance to win more than one gold medal. She will compete in four events: the 500 meters (Feb. 13); the 1,500 meters (Feb. 15), which is her best event; the 3,000-meter relay (Feb. 18); and the 1,000 meters (Feb. 21).

On the men’s side, the matchup between the Korean short track team and Ahn Hyun-soo, or Viktor Ahn, a former member of the Korean national team who will skate for Russia, is sure to attract the attention of fans. Ahn acquired Russian citizenship in December 2011 in order to continue his career on the ice after falling victim to a power struggle within the Korea Skating Union.

Ahn appears to be in the same shape he was in during the 2006 Turin Olympics, in which he won gold medals in the 1,000 meters, 1,500 meters and the 5,000-meter relay. He nabbed the bronze in the 500 meters and won two gold medals, four silver and two bronze in the 2013-14 Short Track World Cup. By comparison, all the competing Korean men won two gold, one silver and three bronze medals combined.

In other events, the women’s curling team, which finished the 2012 Canada World Championships in fourth place, is aiming to win Korea’s first Olympic medal in the sport. The five team members - captain Kim Ji-sun, Shin Mi-sung, Uhm Min-ji, Kim Eun-ji, and Lee Seul-bi - say their best weapon is teamwork because they have been competing together for five years.

As much as the athletes want to win, Koreans are also hoping to see some dramatic moments.

In a poll conducted by Gallup Korea, about 81 percent of the respondents said that Korea will finish at least within the top 10 of the medal count. About 63 percent said their favorite athlete to watch is Kim Yu-na. Speed skating (28 percent) and short track skating (27 percent) were voted the favorite sports.

It looks like the athletes are ready for the Games, but the host city is not. Reporters and photographers who have already arrived in Sochi have been posting pictures and commenting negatively about the facilities. One of the photos taken in a restrooms of the biathlon venue, which showed two toilets side-by-side with no partition, incurred ridicule.

Stacey St. Clair, a reporter from the Chicago Tribune, and Matt Gutman, of ABC, complained about water at hotels, saying, “Water restored, sorta. On the bright side, I now know what very dangerous face water looks like,” and “bees in your honey, beer-colored water, no flush toilets in Sochi.”

Apparently, the conditions aren’t much better at the Russian Seasons Hotel, where members of the IOC are staying. One IOC official found a maid asleep in a bed with a toothbrush in her mouth when he entered the room.

Despite such incidents, the Sochi organizing committee said preparations for the Olympics, including the convenience facilities, are 97 percent completed.

For better or worse, the 17-day event is set to get underway.