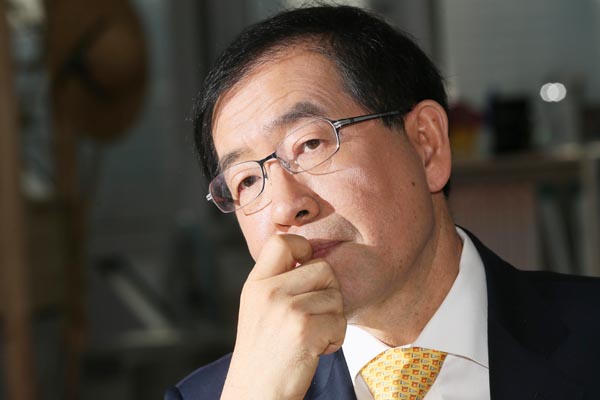 An issue of employment at Seoul’s 24-hour help hotline has turned out to be a major problem for Seoul Mayor Park Won-soon, who - as a former human rights lawyer - has publicly advocated for the rights of laborers, particularly temporary workers.

However, members of the center have long demanded that the Seoul city government employ them directly. If it does, they argue, employees would enjoy greater job security and receive salaries and benefits comparable with salaried civil servants in the city office.

The commission noted that the service providers at the call center have emotionally taxing jobs and that they deserve better treatment.

However, the problem lies in the fact that the 120 Dasan Call Center is just one of the 343 divisions that the city government and private companies are jointly involved in. And most workers in such departments are considered to be employees of the private sector. If Mayor Park listens to the demands of the call center workers, there is a high likelihood that employees in other divisions would insist on the same treatment.

In September, the city said it was premature to decide on full employment for the workers and argued that the decision could affect other workers.

“[Mayor] Park’s decision on the issue will likely impact future employment at the city government,” an official of the city office said. “So I think this makes Park torn between two options.”

The service providers’ calls for better treatment date back to August, when about 150 of 492 workers staged an hourlong strike demanding higher wages. The following month, the workers and their contractors agreed to increase the basic monthly salary by 3 percent, or 29,700 won ($27.52), with a special bonus of 50,000 won for the Chuseok and Lunar New Year holidays.

The city government also considered putting limits on the scope of enquiries fielded by the hotline workers to decrease their workloads. Until now, the call center has fielded questions on every aspect of life in Seoul, from the locations of restaurants and beauty parlors to traffic conditions and city affairs.