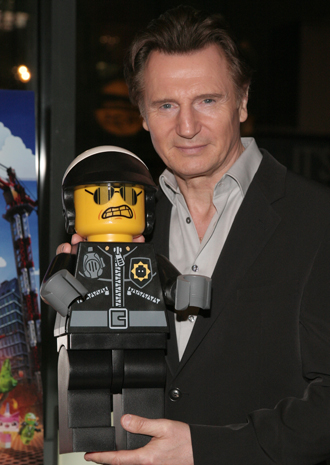 “The Monuments Men,” which also stars Matt Damon, Bill Murray and John Goodman, was second with $22.7 million in sales at U.S. and Canadian theaters. The film is based on the true story of U.S. soldiers who rescued art masterpieces from Nazi thieves.

After three consecutive weeks in the top spot, the Kevin Hart-Ice Cube comedy “Ride Along” took third with $9.4 million, according to data supplied by Rentrak.

Led by the voices of Will Ferrell, Will Arnett and Morgan Freeman, “The Lego Movie” features toy mini-figures of Batman, a pirate and others in a Lego universe faced with destruction on Taco Tuesday.

The film won lavish praise from critics as inventive and funny, with 112 of 118 critics giving it a “fresh” rating on the movie review site Rotten Tomatoes, and far surpassed average industry projections of an opening weekend around $50 million.

“The Lego Movie” was heavily marketed by Warner Brothers and The Lego Group, the Danish company that makes the popular snap together blocks. The toy company released 17 building sets inspired by scenes from the movie. McDonald’s released eight collectable holographic cups with its Happy Meals.

“It’s awesome,” said Dan Fellman, president of domestic distribution for Warner Brothers of the blockbuster opening, which was the biggest of 2014 thus far.

Fellman noted that 59 percent of the audience was actually over age 18, and 55 percent were male. “We even had some midnight show business,” he said. Sales at 3-D showings were also far stronger than is usually the case with animated films.

“The Monuments Men” received mixed reviews from critics and was moved back from its original Dec. 18 release date for additional post-production work and editing. The film, based on the book by Robert M. Edsel, was written and directed by Clooney.

“It was very much in line with the high end of our expectations,” said Rory Bruer, Sony Pictures’ president of worldwide distribution of the $22.7 million figure.

“We’re very happy with our opening, especially given all the noise of the Olympics and the big movies opening around us,” he said, adding that the film was playing well to adult audiences as was expected.

The weekend’s only other major new release, “Vampire Academy,” based on the first book in the “Vampire Academy” series by fantasy author Richelle Mead, opened in the No. 7 spot with $4.1 million in sales, according to studio estimates.

Rounding out the top five, Disney’s long-running musical “Frozen” took fourth place with $6.9 million, while “That Awkward Moment” was fifth, collecting $5.5 million in sales. “Frozen” has racked up $369 million since its November debut.

“Lone Survivor,” the tale of four U.S. Navy SEALs who run into an ambush in Afghanistan, was sixth with sales of $5.3 million. It has generated $112.6 million over seven weeks.