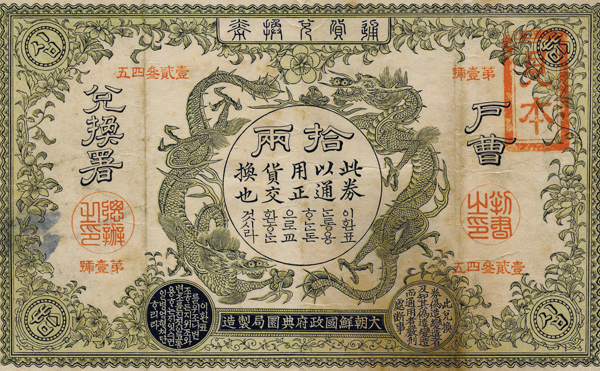 This year’s Hwadong Auction, a currency auction held by copper manufacturer Poongsan, will feature some of the oldest and rarest currencies in Korea’s modern history.

Among the 567 currencies that will be put up for auction, Hojotaehwangwon, or money printed with the Hojo currency printing plate, has been receiving the most interest due to its historical significance.

Hojotaehwangwon is Korea’s oldest recorded paper money. Its history dates back to 1893, when King Gojong of the Korean Empire (1897-1910) reformed the modern currency system. When reform failed, however, most of the notes were incinerated before circulation even began.

So far, Hojotaehwangwon has appeared in only two Korean auctions, and its rarity has driven its price up. The currency traded for 92.5 million won, or $86,348, in the 2010 Hwadong Auction. Its estimated value this year is 80 million won.

The Hojo currency plate became known to the public last September when it was returned to Korea 62 years after having been illegally removed by a U.S. soldier. It was brought back after an investigation between the two countries to promote the repatriation of cultural artifacts.