Coming to grips with solo moms

Coming to grips with solo moms 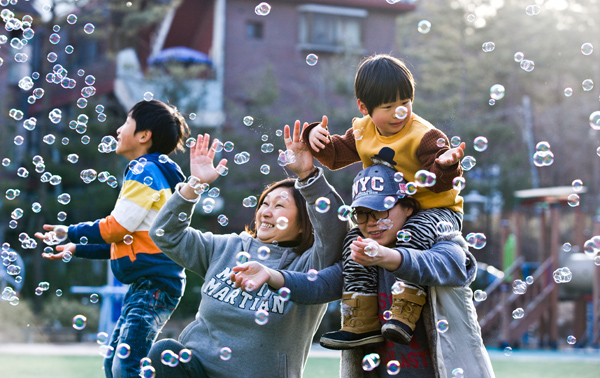 Miss Jung got pregnant in October 2010 by her boyfriend of two months. When she told him, he stopped taking her phone calls.

“I wanted a kid more than a husband,” says Jung, 43. “I was afraid that if I told anyone about the pregnancy, they would take me to a hospital for an abortion.”

Jung gave birth to a son. She quit her job but had enough money to take care of herself and her child. Jung now finds single moms or dads on the Internet to go out on picnics on the weekends and share experiences with.

Nine years ago, Miss Kim was in love with a man she met at a company. They were both in their 20s and planned to get married. But when she became pregnant, he disapproved and told her to get an abortion. Kim refused and lost her boyfriend.

She continued to work at the company through the eighth month of her pregnancy. After giving birth, she returned to work, although the company didn’t want her to. She did not yield.

“My mother took care of my child until he was old enough to go to kindergarten,” says Kim, “and that’s how I was able to go back to work.”

According to Statistics Korea, children born out of wedlock in Korea surpassed 10,000 for the first time in 2012. Yoo Seung-hee, a Democratic Party lawmaker on the Gender Equality and Family Committee of the National Assembly, says that the figure almost doubled from 5,540 in 2000 to 10,144 in 2012.

One of the main reasons for the sharp increase is the growing number of women in their 30s who chose to have a child on their own. Gil Jung-woo, a Saenuri party lawmaker, analyzed the registration numbers of parents of out-of-wedlock children from 2010-12 by region and age, information contained in registration numbers. The results showed that there were 29,742 parents who registered as single parents, and those in their 30s accounted for 54.9 percent (16,347), exceeding the percentage of teenage and 20-something parents, which totaled 41.5 percent. Ten years ago, only 45.4 percent were above 30.

Lim Ae-duk, the head of the welfare center Chungsoo, which runs a single mom support center in Jeju, says there are many women who hold decent jobs including teaching and photography. 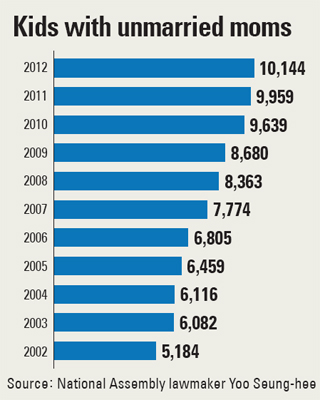 In Seoul, Deungchon 3-dong in Gangseo District has the most single parents. Last year, there were nine birth registrations in the community center, with the age of solo parents ranging from 17 to 39 years old.

“People think that teenage single moms will be the most, but not these days,” says Kim Jae-joong, leader of a welfare support team at the community center. “We have more single moms who are old enough to get married.”

Some single moms celebrate their status and say they enjoy the twin benefits of being both a mom and single. Kim Seon-young, 34, has a five-year-old son. She met the child’s dad when she was 29 years old and working as a counselor in a card company. When she told her boyfriend she was pregnant, he took flight. Kim says she was competitive about everything in the past, but now she feels mature thanks to the birth of her child.

“These days my kid cheers me up with touching words,” she says. “I rely on my kid a lot.”

“I can have a cup of coffee in a nearby town on traditional holidays instead of being stressed out by the in-laws, which most Korean married women have.”

A month after she broke up with her boyfriend, after a series of minor arguments, Choi found out she was pregnant. Being a hairdresser, she realized she had enough money to raise the child on her own. Her son is now in elementary school and makes a great companion.

“My kid is growing up with me,” she says. “We’re growing up together as equal human beings.”

However, raising a child as a single parent isn’t always easy. Financial problems and how people judge are difficult issues. It’s most difficult when the child asks for a dad.

“I’ve never wanted a husband, but I think it’s different for a kid,” said Kim. “It really breaks my heart when my son cries for a father.”

In Korea, single mothers only account for 2 percent of births.

“I was allowed to fill out the forms in a special room, but he didn’t let me sit in a chair,” she recalled. “I felt like I was being investigated.”

When a government institution has to conduct an administrative procedure, single mothers can get entangled in red tape. Another single mother surnamed Lee majored in psychology at university and was working when she had a son two years ago. She was living in a center for single mothers and studied at the Korea National Open University. She wanted to go to France, which has a positive environment for single mothers and applied for a scholarship.

But administrators told Lee she could not apply as a ‘nonmarried’ single parent and advised her to say she was divorced.

“It’s sometimes difficult because I feel like others are asking me, ‘Where is the kid’s dad?’?” says Lee.

The national census taken every five years by Statistics Korea also leaves single mothers out. If one checks ‘single’ in the proper box, you can’t go on to questions about children.

“National organizations give no consideration to single mothers,” says Mok Kyung-wha, head of the Korea Single Mother Family Association. The encyclopedia on one of Korea’s biggest web portals describes “single mother” as “Usually refers to teenagers and occurs due to fast industrialization, urbanization and sexual openness.’

“Single mothers come in all ages,” says Gil. “The concept should be expanded from teenage single mothers.”

The first order of change, experts say, is for people’s prejudices to be addressed and countered.

The Korea Development Institute (KDI) published a report in 2011 titled “Accurate responses to the increasing rates of single parents and excessively low birthrate” that was skeptical as to whether the country’s low birthrate could be solved by only encouraging married couples to have children. It pointed out the necessity of improving people’s attitudes about lifestyles such as people living together or having out-of-wedlock children.

“You can avoid social stigma that results from patriarchal family relationships only when you accept various types of families,” says Professor Choi Jong-ryul of Keimyung University.

On the bright side, more TV dramas and movies about different types of families are being introduced through the media. “Family Ties,” which was released in 2006, showed new concepts of families that differed from the traditional concepts. “A Gentlemen’s Dignity,” which was broadcast in 2011, showed a single mother who raised her son on her own. “My Place,” a recently released documentary, is about a student studying in Canada and raising a kid on her own.

French futurologist Jacques Attali predicted that the traditional family would face big changes. He said that, with the increase of life expectancies, it will be harder for married couples to stay together forever, and with advanced technology, human relationships tied together by sex and births would be loosened.

“We need to change our social system that is focused on married-couple families since many different types of families are emerging,” said Hwang Eun-suk, head of Single Parent.