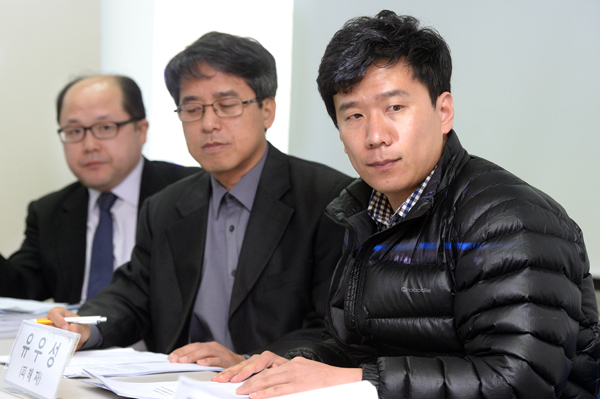 Yu Wu-seong, right, facing an appeal on charges of espionage, attends a press conference on Sunday with his attorneys to question evidence provided by the National Intelligence Service, which they insist was forged. [NEWS1]

Crucial evidence provided by the National Intelligence Service (NIS) to prove the alleged espionage activities of a North Korean defector has been claimed to be forged, putting the nation’s top spy agency at the center of controversy once again.

At an unusual press meeting on Sunday, the prosecution said that the immigration records for the defector, Yu Wu-seong, were provided by the NIS following the Chinese Embassy’s official confirmation that the records had been forged.

“The controversial records submitted to the court were given by the NIS, which obtained them in China through informal sources,” the prosecution said. “The prosecution also received a confirmation letter from the Korean Consulate General in Shenyang, China, which said it was true that authorities from the Chinese public security bureau issued the record.”

The case goes back to the trial held in August 2013 at the Seoul Central District Court, when 34-year-old defector Yu was acquitted of charges of espionage for North Korea.

At the time, the prosecutors argued that Yu, who worked as a civil servant for the Seoul city government in South Korea, leaked the personal information of 200 defectors living in the capital to the North Korean regime.

North Korea frequently refers to defectors as “traitors,” guilty of abandoning the Communist state to live in the capitalist South. Remaining family members of the defectors are reportedly killed or sent to labor camps, many defectors have said.

The prosecution claimed Yu visited North Korea twice in 2006 via China, between May 23 and May 27, and May 27 and June 10. Yu admitted to taking the first trip, saying he attended the funeral of his mother, who died in North Korea. However, he denied the second trip.

But the prosecution argued that, just an hour after he returned to China on May 27, he again departed for North Korea. During the second trip, Yu was allegedly ordered by North Korea to obtain information on defectors living in the South.

At the first trial, however, the court ruled that there was no evidence that Yu was in North Korea for the second trip and acquitted him of the charges.

Afterward, the prosecution tried to obtain the entry and exit records for Yu between China and North Korea from 2006, but the Chinese authorities refused to cooperate with the Korean prosecution, claiming that they had never before released such documents.

The prosecution then asked for the cooperation of the NIS, which has its own agents working at the Korean Consulate General in Shenyang.

In October 2013, the prosecution got the records to prove Yu’s second trip from the NIS, with the signatures and seal marks of the Chinese public security bureau.

However, in December, Yu’s attorney requested an official confirmation of the records from the Chinese Embassy in Seoul through the Seoul High Court, in charge of the appellate suit that began in October 2013.

On Thursday, the Chinese Embassy sent an official letter to the court stating that the records the prosecution presented were forged, including the seal and signature.

Yu’s attorney has presented their own immigration records for Yu, provided from China, which only verify his first trip.

“The prosecution or the NIS must have manipulated the evidence to claim Yu’s re-entry into North Korea,” Yu’s attorney said in a statement at the press meeting on Sunday. “All of the records submitted by the prosecution were sent from NIS agents working at the Korean Consulate General.”

However, the NIS claimed in a press release on Sunday that the records were all legitimate and legally obtained.

“The entry and exit records for Yu submitted to the court were true, obtained through the Korean Consulate General in Shenyang,” the NIS said in a statement. “In further proceedings in the appellate suit, we will prove in detail that all our records were true.”

Meanwhile, the Ministry of Foreign Affairs has stated it hasn’t had any involvement in the case.