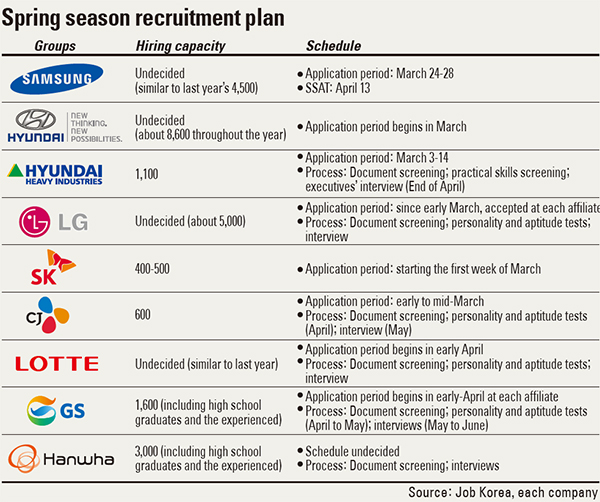 Job market experts say the decline follows years of excessive hiring, which took place as an effort to live up the government’s push to create more jobs.

“It’s not a big change compared to last year’s spring [recruitment] season, so job seekers won’t have to worry too much,” a Job Korea spokesperson said. “The companies this year seem to have reduced the number of new recruits, because despite the sluggish industry economy, they already have hired more than their actual capacity in the past few years.”

Samsung Group, after stunning the local job market with an experimental recruitment method in which each college’s president could recommend a fixed number of students, decided to return to its old recruitment format using the Samsung Aptitude Test (SSAT) for this season. Samsung affiliates will hire about 4,500?new workers?this spring, with an executive-level interview and a public presentation interview as part of the screening process.

Some conglomerates put more emphasis on candidates’ awareness of Korean history. Hyundai Motor launched a history essay section in its recruitment process, and GS is expanding its Korean history tests to all of its affiliates starting this spring.

Posco hasn’t confirmed a detailed hiring schedule for the season, but it will open a special hiring track in March for those who have completed their mandatory military service as commissioned officers. A Posco spokeswoman said the company will have a recruitment session, but she couldn’t disclose any details. She said the company will unveil the plan before June.

Hanwha also hasn’t finalized its recruitment schedule, but it will have another hiring season without a personality and aptitude test package. The company eliminated those tests last year while placing more emphasis on document screening, especially on cover letters, and two rounds of interviews. Junior and senior employees in each department directly review the applications and cover letters to pick the personnel they need, a Hanwha spokesperson said.

SK and CJ officials will pick candidates after having face-to-face conversations with them. SK will have a credential blind screening session in which candidates are assessed on their creativity and excellence in public speaking. The final candidates will also go through an overnight assessment where practical skills and personalities are evaluated