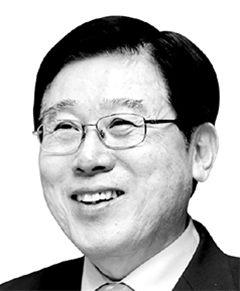 There’s a lyric from “Man of La Mancha,” a musical based on the Spanish novel “Don Quixote,” that Park Chul, the outgoing president of Hankuk University of Foreign Studies (HUFS), has always kept fresh in his mind.

“To dream the impossible dream,” it begins, “to fight the unbeatable foe, to bear with unbearable sorrow and to run where the brave dare not to go .?.?.” These words, from the mouth of a brave protagonist, are perhaps a poetic reminder that our wildest ambitions are perhaps not as distant as we believe.

This is an idea that has stuck with Park since he first read Miguel de Cervantes’s 17th-century masterpiece during his first year as a Spanish major at HUFS.

And just like his favorite story, Park’s eight-year term as the school’s president was filled with ups and downs - a period in which he overcame various bureaucratic challenges and achieved goals he once thought unattainable.

Park officially stepped down from his post on Tuesday and is succeeded by Kim In-chul.

In a recent interview with the JoongAng Ilbo, just a week before his run at the university ended, Park recalled one of his first challenges, which came in May 2006, just a month after he took office.

A labor union of the school’s faculty staged the longest strike ever for a college labor group in Korea, which began in May that year and lasted until January 2007.

“I never gave up on convincing the faculty members to go back to their work,” the outgoing president said. “And I strived to let students and professors know the school’s firm position on not succumbing to such a strike.”

A scholar of Spanish literature, one of the initiatives that Park undertook during his presidency was to make HUFS a more global institution, forming sister relationships with universities overseas.

Thanks to his efforts, the number of colleges abroad that are partnered with foreign-language specialized schools has jumped to 568 across 86 countries, from just some 150 schools in 2006 when Park was appointed.

To realize his goal of making HUFS a global university, Park said he visited more than 90 schools in 30 countries over the past eight years. And just a week before his resignation ceremony, he signed a partnership memorandum with the University of Havana in Cuba.

Park’s tireless efforts to market HUFS worldwide reached a peak when U.S. President Barack Obama spoke at the university on March 26, 2012, on the sidelines of the Nuclear Security Summit in Seoul.

Before approximately 800 students in a packed auditorium, the first African-American president of the United States touch upon Korea’s role in promoting global peace and urged North Korea to give up its nuclear weapons program. Out of several universities in Seoul, HUFS was selected by the White House to host Obama. It was the first time that an incumbent U.S. president gave a speech at a university in Korea.

Park likened his successes during his years as school president to those of Don Quixote.

“It is the spirit of Don Quixote that I have always kept in mind that made HUFS successful as a global institution,” he said, “and also the economic miracle of this country.”