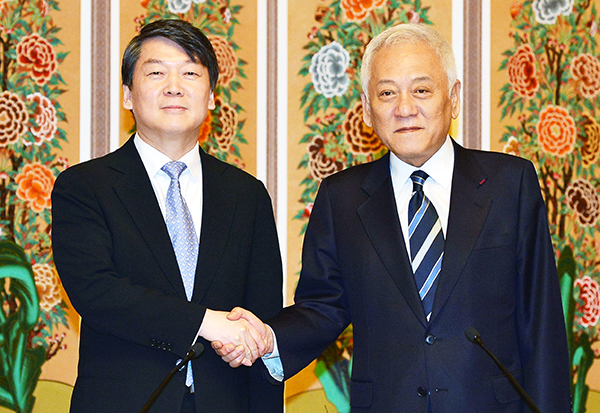 Main opposition Democratic Party Chairman Kim Han-gill, right, shakes hands with independent lawmaker Ahn Cheol-soo prior to a joint press conference at the National Assembly yesterday morning. They made a surprise announcement that they would establish a united party against the ruling Saenuri Party. By Kim Kyung-bin

In a move that promises to shake up the political landscape and puts the ruling Saenuri Party on the defensive, the major opposition Democratic Party and maverick lawmaker Ahn Cheol-soo’s political camp agreed yesterday to form a united party before the June 4 local elections.

DP Chairman Kim Han-gill and first-term lawmaker Ahn held a press briefing at 10 a.m. yesterday, where they announced the union, putting the next presidential election in 2017 at the forefront of the political battle.

“[Our] two sides will push for the creation of a new party for ‘new politics’ as early as possible and, against this backdrop, we will strive to achieve the transfer of power in 2017,” said the two leaders in a joint statement.

Ahn and Kim also condemned the ruling party and the Park Geun-hye government for flip-flopping on their presidential campaign pledges and their heavy-handed policies, saying they decided to form a new party to “punish the politics of lies and realize the politics of promise.”

Ahn had been in the process of creating a new political party, named the New Political Vision Party, which was scheduled to launch by the end of the month.

DP Chairman Kim proposed the merger to Ahn on Friday. After marathon talks, the two struck a deal at around 12:40 a.m. Sunday and announced the deal at 10 a.m. at the National Assembly in a room packed with reporters.

The new party keeps Korea in a system dominated by two major parties, although it remains to be seen how senior figures in both groups will react to the merger.

Taken aback by the surprise decision, the Saenuri Party yesterday strongly condemned the merger, calling it typical of old-style political tricks and a retreat from Ahn’s repeated calls for a new style of politics.

“There was never the spirit of new politics in the opposition block in the first place,” said Yoon Sang-hyun, deputy Saenuri floor leader, who also called the merger decision “unprecedented, the worst behind-closed-doors politics” and “a political show.”

“This is nothing more than a surprise political show staged by the two because their chances of winning in the local elections were slim,” continued Yoon, who also claimed voters would make the opposition pay for such a trick.

The merger apparently took the Saenuri by surprise, as it was preparing for a three-party fight in the coming elections.

“We had no idea about a party-to-party merger, although we expected a possible coalition for the election,” said a senior Saenuri lawmaker yesterday, speaking on the condition of anonymity. “The party will soon mull over strategies to prepare for a two-way contest.”

When the DP and New Political Vision Party were separate, it was expected the two would be fighting over left-of-center voters, allowing the Saenuri a strong showing in the June elections. 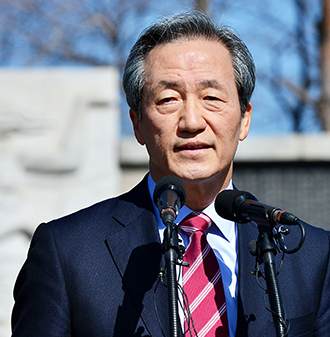 But while the merger may make electoral sense for Ahn and the DP, the entrepreneur turned lawmaker is facing criticism for pursing “old-style politics,” the very thing he criticized the DP and Saenuri for when he launched his political career.

“Ahn may think he hit a jackpot, as he won a closed-door deal with the major opposition party that commands 126 lawmakers, while his envisioned party only had two seats,” said Park Dae-chul, spokesman of the Saenuri, in a mockery tone.

“But since he now decided to merge with a party that he has long branded an old political faction, his promises of new politics have become old politics. ... We advise him to look back and ask whether he just became one of those old-timed politicians.”

It also remains unclear how the DP leadership is going to share power with Ahn’s team, given the DP’s longstanding status as a major political party.

The software mogul turned lawmaker has enjoyed a formidable following since his debut in the political arena in September 2012, when he launched a bid for the presidency as an independent.

Promising to bring “new politics” to the scandal-ridden political scene, Ahn vowed to stick to his principles in the National Assembly, an approach that branded him a fresh voice with the potential to upset the political establishment.

Ahn then entered the National Assembly last April by winning a by-election to represent Nowon B District,

The first-term lawmaker has also called for changes to Korea’s export-driven economy, to make it less dependent on family-owned conglomerates, or chaebol.

Kim and Ahn also said, in line with a key pledge made in the 2012 presidential election, the new party would abolish top-down party nominations for candidates running for municipal posts, such as mayors, district office chiefs and local council members, in the June elections.

Under the agreed pledge, those running for municipal offices will run without party affiliation.

The Saenuri, however, recently reneged on the pledge and said it would instead introduce an open primary, where people with no affiliation to the Saenuri can cast votes for the party’s nominations.

Four hours after the big announcement yesterday, seven-term lawmaker Chung Mong-joon of the Saenuri declared he would join the race for the Seoul mayoral office in the June elections. However, his announcement was overshadowed by the Ahn-DP news.

“Seoul is the heart of Korea, but for some time that beat has been weakening,” said Chung from Baekbeom Square, a park that honors revered independence activist Kim Gu. “I am running for mayor to revive that heartbeat.”

To demonstrate his commitment to the city’s top post, Chung vowed that, if elected, he would serve the post’s entire four-year term, which lasts until June 2018, meaning he would not quit to run in the 2017 presidential election. Within the ruling party, Chung has been thought of as a key presidential hopeful.

A son of late Hyundai Group founder Chung Ju-yung and the richest lawmaker in the National Assembly, with more than 1.9 trillion won ($1.7 billion) in assets, Chung will vie for the Saenuri nomination for mayor with former two-term lawmaker Lee Hye-hoon and former Prime Minster Kim Hwang-sik, who served in the Lee Myung-bak administration.

Whoever gets the Saenuri nod is still expected to face stiff competition against incumbent Mayor Park Won-soon, especially following the merger between the DP and Ahn’s party.

Mindful of the merger, Chung downplayed the deal, claiming the two forces did something political that they “should not have done for the people.”

“The opposition did it because it was nervous about the local elections,” said Chung. “I feel sorry that Ahn’s new-politics principles fell apart like this.”

In a survey conducted by the JoongAng Ilbo of 800 Seoul residents on Friday and Saturday, Chung trailed Park 44.9 percent to 47.7 percent - but those numbers are a statistical dead heat, considering the poll had a margin of error of plus or minus 3.5 percentage points.