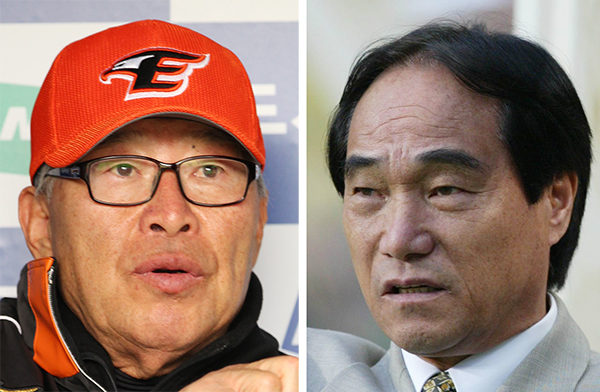 Beginning in the early 2000s, Sir Ian McKellen played the role of the wizard Gandalf in the “Lord of the Rings” and “Hobbit” trilogies. He is 74 but is still acting in many movies. Harrison Ford, who became popular among Koreans for his portrayal of “Indiana Jones” while he was in his 40s, will be on the big screen this year with “The Expendables 3.” He is 72.

They are the only coaches in their 70s.

Kim, 73, returned to the field last season for the first time in nine years in a bid to end the Daejeon-based Eagles’ nightmare. The club finished last place in four of the previous five seasons.

Park, 76, who led the Korean national youth team to fourth place in the 1983 Mexico World Youth Championship, also returned for the first time in nine years to lead Seongnam FC, a club funded by Seongnam citizens, this season.

Unlike other club managers, many of whom are in their 40s and early 50s, these old boys have a lot of influence and don’t hesitate to speak up about issues such as poor league management to the Korea Baseball Organization and the Korea Football Association.

With the KBO’s preseason games and the 2014 season of the K-League kicking off on Saturday, fans are hoping the two will be able to bring some changes this season.

In the past decade, both leagues have been hiring coaches mostly in their 40s and early 50s who are better able to communicate with younger players.

On the other hand, the influence that many older coaches previously wielded over clubs’ marketing strategies to attract fans and improve facilities has gradually disappeared.

With Park’s return, it looks like each league has its elder statesman, and Park wasted no time sounding off.

“It’s too early to be happy for being a citizens-funded club for Seongnam FC,” Park said in a media day event that was held on Monday, before the league’s kickoff.

“Clubs won’t have a bright future if they don’t try to communicate with fans. Being a citizen-funded club doesn’t mean that it will bring many fans to the field. Clubs in the K-League also need to improve their current marketing strategies that heavily rely on big-name conglomerate sponsors. They need to find sponsors that really want to bond with football fans.”

Eagles’ manager Kim has urged the KBO to expand its quota of foreign players.

“The league has been telling clubs that increasing the number of teams from eight to 10 will improve the league’s quality but hasn’t provided solutions about how they will supply more players to the league,” he said.

“Such poor management only inflated the price of free agents. We seriously need to have more foreign players to upgrade the level of the league since we don’t have any other solutions.”

The two coaches will likely have a tough season because their clubs are predicted to remain in the lower ranks. In his Eagles’ debut season, Kim, who has won 10 KBO titles in the past, finished in last place. It was his first time being the manager of a last-place club in his 23-year career.

Seongnam FC faces a similar situation. The club won three straight league titles from 1993-95, when it had a rich sponsor (the Unification Church), but the church gave up its ownership after last season.

The Seongnam city government, which doesn’t have much money to spend, then took ownership of the club, but it had to let many talented players leave during the offseason.