Since last week, the nation’s leading web portal company, Naver (or NHN), has been in the limelight because of its mobile messenger app, Line.

The IT company’s stock rose 16 percent during the four trading days since Feb. 25 after Bloomberg broke the news that Japan’s telecommunication and internet juggernaut, SoftBank, was interested in buying the app. Line has the largest market share of mobile messenger apps in Japan, although it was developed and used here. Although Naver denied the report, the news kept the attention of industry insiders and investors as it followed Facebook’s $19 billion acquisition of WhatsApp, the largest mobile messenger app, earlier this month.

After dipping half a percent on Monday, Naver’s stock recovered and closed at 850,000 won ($793) yesterday.

Just before Facebook’s deal, the Japanese Internet giant Rakuten, which has the biggest online e-commerce platform in the country, bought the mobile messenger app Viber for $900 million. 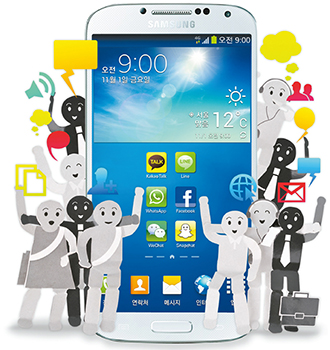 So, why is there a sudden explosion of interest in mobile messenger apps that have been around for more than half a decade?

The social media IT industry has recently seen a major shift. Once-dominant Facebook has been losing ground.

It still has more subscriptions than anyone else, connecting more than a billion people worldwide, much more than China’s WeChat, which is estimated to have up to 600 million users. However, in recent years, many people in the younger generations have been opting for mobile messengers while leaving their Facebook accounts inactive.

“It’s been awhile since I logged onto my Facebook account,” said a 40-year-old office worker surnamed Song. “When I first joined Facebook a few years ago, it was hip and everyone was into it. But today I have moved on because there are so many postings that just seem irrelevant.” Nowadays, Song said he only communicates with friends and family through KakaoTalk, the most popular mobile messenger in Korea.

“First of all, unlike Facebook, the messages, including photos that are sent and received, are streamed live, and secondly, the information exchanged is closed to the public, which makes it more personal.”

According to a study by the Korea Information Society Development Institute, Facebook’s share of the Korean market fell from 28 percent in 2012 to 23.4 percent last year.

Ninety-two percent of people in their 20s use mobile messenger apps, the highest of any age group. But even 87 percent of those in their 50s use them, too.

This trend isn’t limited to Korea. It turns out the exodus from Facebook, particularly among the younger generation, has become a global shift.

IT giants like Facebook and Rakuten hope that their acquisitions will help make up for the customers they’re losing.

In fact, Facebook CEO Mark Zuckerberg said during his keynote speech at the Mobile World Congress last month in Barcelona that he chose WhatsApp because it has been the most beloved mobile messenger app.

“It’s the most engaging app that we’ve ever seen that exists on mobile by far,” Zuckerberg said. “About 70 percent of people who use WhatsApp use it every day, which kind of blows away everything else that’s out there.”

Rakuten had a similar reason for acquiring Viber, although the Japanese company has reported record-breaking operating profits in recent years. Hiroshi Mikitani, the company’s founder and chairman, said after the acquisition last month in Tokyo that he expects the number of users will rise from 200 million to about 500 million, including users in the United States, Russia and Australia, the main markets for mobile messenger apps. 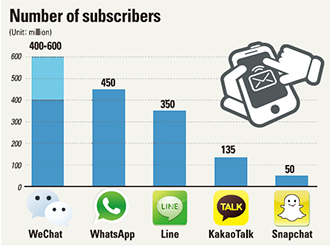 But how will a mobile messenger app that is practically free contribute to higher revenues for these IT companies?

When Facebook announced that it was buying WhatsApp for $19 billion, there were two reactions from industry and market experts: they were shocked at the size of the payment and they questioned whether WhatsApp was really worth that much.

“Our initial reaction to the news was “sticker shock,” given the price paid for WhatsApp, and we acknowledge the price paid appears full at first glance,” Nomura Securities analyst Anthony DiClemente wrote after the announcement was made.

However, DiClemente said Facebook’s choice could benefit the company as WhatsApp has seen “incredibly” rapid growth. He added that it would strengthen Facebook’s strategic position in its industry.

Analysts say the benefit of acquiring a popular messenger app isn’t from generating direct revenue but rather tapping into the data of its growing number of users.

“The strategy behind Facebook’s acquisition of WhatsApp is not to generate revenue through the 99-cent annual fee,” Eleni Marouli, an analyst at IHS Technology, said in an email response.

“In fact, we believe that this charge will be scrapped altogether in the near future in order to remain competitive with other messaging apps, such as the ones you mentioned below.”

Marouli said instead of directly generating advertising revenue for Facebook, WhatsApp likely will provide valuable data that will improve its advertising quality, adding that, until now, Facebook has been racking up its advertisement revenue through volume.

“However, as these figures decelerate, revenue growth will need to come from the higher prices of Facebook ads,” Marouli said.

The analyst said that WhatsApp’s strong presence in key emerging markets like Brazil and India will provide insightful information.

“South and Central America, the Middle East and Africa made up 13 percent of total Facebook revenue in 2013, even though it is the largest region in terms of monthly active users at 30 percent. Building good mobile data in these markets is essential as they are not only mobile-first in their use of the Internet, but often mobile-only,” Marouli said. “WhatsApp promises to supply better data in these countries as they verify users by phone numbers, rather than just user names.”

Jack Kent, another IHS analyst, said that although Korean messenger apps are dominating the markets in Korea and Japan - compared to WhatsApp or China’s WeChat - they will likely struggle trying to expand globally.

“Asian mobile messenger apps are far more advanced in generating revenues through content platforms and revenue share,” Kent said. “We expect Asian apps to move their model internationally, but monetization will be much lower given their poorer content monetization.”

While WhatsApp charges a small fee, the Korean apps are free. However, they make their revenue by connecting to other services, such as social network games. The most popular one was Anipang, a simple block-busting game with animal characters that was introduced in July 2012. In its first 74 days of release, it was downloaded more than 20 million times, the first game to break the 20-million mark. Other services include selling animated characters that people could upload on their messengers.

Kent said Korean and Japanese mobile messenger apps are the most advanced mobile content markets for such development, which other apps like Tango have tried to model themselves on. But Tango is less aggressive than Asian developers with content sales, which could alienate users in markets that are more accustomed to using WhatsApp or Facebook.

“International expansion should first focus on audience-building and user acquisition, not monetization. Success globally does not have to mean matching the revenue per user found in Japan or Korea,” Kent said. 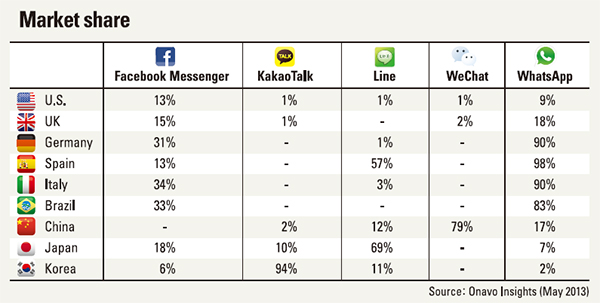