Alley culture must be preserved, too

Alley culture must be preserved, too 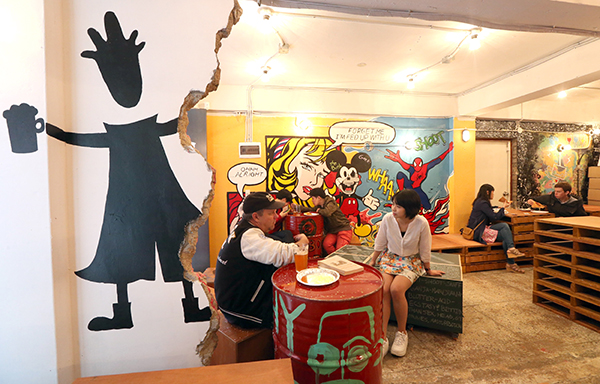 Gyeongridan Road is the trendiest spot in Seoul today. The two-lane road stretches 950 meters, or about a half a mile, from Noksapyeong Station to the Hyatt Hotel. While it is officially named “Hoenamu Road in Itaewon 2-dong,” the Army Central Finance Accounting Corps, or Gyeongridan, is nearby, and people refer to the road by that name.

The once ordinary road has been changing in the last two to three years. Microbreweries, small diners and boutique stores have all opened there, offering things to see, eat and enjoy. The street is filled with young Koreans on Friday nights and weekends. But the unique neighborhood faces an uncertain future. A franchise coffee shop has opened at the entry to the road. While some might find it trivial, the lessons of the past suggest that the fate of the street is bleak.

Before Gyeongridan Road became popular, there were other streets beloved by the people of Seoul. Garosu-gil, Samcheong-dong, Itaewon, Hongdae and Sangsu-dong emerged as trendy spots in a similar pattern.

But when a street becomes popular and pedestrian traffic increases, franchise coffee shops open, followed by brand-name shops for shoppers looking for cosmetics, apparel and accessories. Garosu-gil is full of large flagship stores of foreign brands, including Zara and H&M. A fashion designer who set up a studio in Garosu-gil is looking for a new site after the landlord sold the building to a corporate investor. She said, “I have to find a neighborhood that’s not going to become hot soon in order to keep the rent low and stay in one place for a long time.” Samcheong-dong and Hongdae are not much different.

It is not just about the mom-and-pop businesses. As the small shops disappear, the color and culture of the streets go extinct as well. The not-yet-famous designers, chefs and patissiers were not just in the business to make money, but also produced trends to create a new culture. Will the streets be as charming after they are gone?

In 2012, New York City designated a special enhanced commercial district for neighborhood retail streets on the Upper West Side. In order to provide diverse and traditional retail experiences, each store’s width should not exceed 12 meters (40 feet), and there must be at least two stores in a 15-meter-wide lot. It was a clever plan to save the small shops and unique streets.

The streets may remain intact, but culture can disappear in the blink of an eye. Spaces that took a long time to mature could go stale easily. Why can’t we have a laid-back commercial zone where we can relax and take a break from Myeongdong or Gangnam? Cultural preservation applies to streets and alleys as well.

*The author is a staff writer for the JoongAng Sunday.