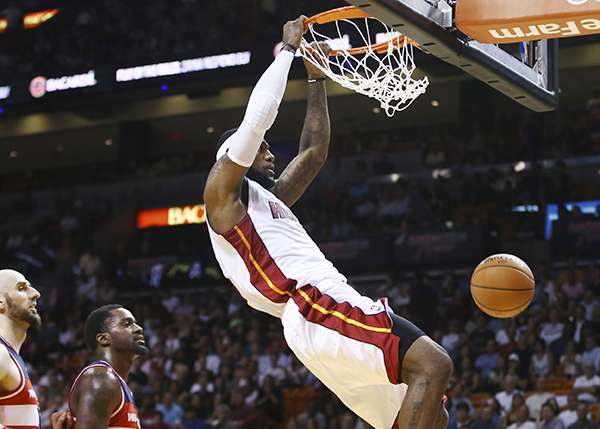 Miami Heat’s LeBron James dunks during the first half against the Washington Wizards in Miami, Monday. [AP/NEWSIS]

LeBron James set the tone pregame. Dwyane Wade took over in the fourth quarter. And the Miami Heat got a win they desperately wanted.

Wade scored 13 of his 22 points in the final period and led a critical 12-0 run down the stretch, James led all scorers with 23 points and the Heat clinched a playoff spot by beating the Washington Wizards 99-90 on Monday night to snap a three-game losing streak.

Chris Bosh scored 22 for the Heat (44-17), who moved within one game of Indiana (46-17) in the race for the No. 1 seed in the Eastern Conference and 1 and a half games behind San Antonio (46-16) for the league’s best record. Ray Allen added 13 for Miami, which was coming off a trip where it lost at Houston, San Antonio and Chicago, the last of those coming in a late collapse on Sunday.

Wade hasn’t typically played back-to-backs this season. He did this time, and the Heat simply rolled with him in the final minutes on the way to avoiding what would have been their first four-game slide since 2011.

“He made the right plays,” James said.

John Wall finished with eight assists for Washington. Washington led 84-83 midway through the fourth, when Wade took over.

A three-point play put Miami ahead to stay and he then had assists on Miami’s next three baskets - a short jumper and then a 3-pointer from Bosh, then a layup by James.

Wade capped the run with a score of his own, on the way to his first 13-point, three-assist fourth quarter since Feb. 18, 2009. His 13 in the fourth marked his highest-scoring quarter this season and came with him playing consecutive days for the first time since Jan. 4 and 5. It was only the third time all season he’s appeared in both nights of a back-to-back.

Both teams shot only nine free throws; despite being in attack mode, James didn’t shoot one for the second straight game, just the second time that’s happened in his career, the first coming in December 2003, early in his rookie season.

James went scoreless for a stretch of nearly 15 minutes in the first half and still led everyone with 19 points by intermission. The entirety of his first-half scoring came in two impressive spurts - three 3-pointers in as many tries over a span of 2:43 early in the game, then 10 straight Heat points in a stretch of 3:23 late in the half.

Miami’s lead was 12 early in the third before Washington went on a 10-0 run, with Gortat scoring the first eight and Trevor Booker’s jumper getting the Wizards within 59-57. And after Miami rebuilt the lead to seven, Washington took off on another quick burst, this one enough to give the Wizards their first lead since 1-0.

In less than 2 minutes, Washington outscored Miami 11-0, Webster scoring six in 25 seconds. He head-faked James in the air to start what became a four-point play, then had an alley-oop dunk off a Wall pass on the next possession as Washington took a 65-64 lead.