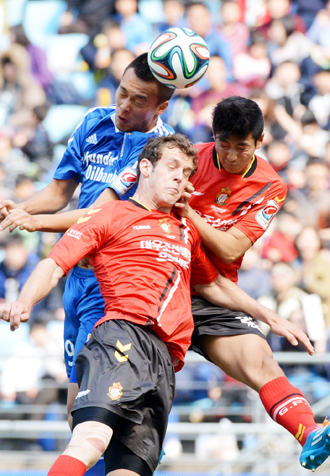 The Ulsan Hyundai Tigers, which got off to a good start in the K-League’s latest season last week with a win against the defending champions Pohang Steelers, won its second game in a row yesterday.

In the second round K-League Classic match against the Gyeongnam FC, the Tigers overpowered their opponents 3-0.

The Tigers had a tough time creating scoring chances in the first half. Coach Cho Min-kuk tried pairing up Ko Chang-hyun with Baek Ji-hoon as central attacking midfielders, instead of Masuda Chikashi of Japan, while placing Kim Sun-min on right-wing. But those strategies did not work out, as both Ko and Kim failed to deliver accurate passes to their 196-centimeter-tall (6-foot-5) striker Kim Shin-wook and had a hard time cooperating with other attackers.

The Gyeongnam FC had more chances to score, but 20-year-old rookie midfielder Lee Chang-min blew a one-on-one chance against Tigers goalkeeper Kim Seung-kyu in the sixth minute. The Tigers goalie again made a great save three minutes later when Gyeongnam’s forward Kim In-han got past the defenders and blasted a shot.

For the second half, though, the Tigers replaced midfielder Baek with rookie Kim Min-kyun and later substituted forward Ahn Jin-beom for Kim Sun-min, strengthening the offense. With more speed and better passes, the Tigers started dominating the match.

In the 62nd minute, forward Han Sang-woon delivered a beautiful cross in a free kick situation, and defender Kim Chi-gon scored on a header, taking a 1-0 lead.

Just three minutes later, Han delivered on a free kick again, this time to Kim Shin-wook, the team’s best striker, who put the ball into the right corner of the net off of a stunning volley.

The Gyeongnam FC then wiped out any chance they might have had with a goal by Woo Joo-seong five minutes later.

“I’m happy that the team won the home opener,” said Kim Shin-wook in a post-match interview. “Our team was tired physically since we also had to play an Asia Champions League match during the week, but we were able to overcome the problem by cooperating well.”

On Saturday, the defending champions Pohang Steelers failed again to claim their first victory of the season, losing 3-1 against the Busan I-Park. In the match held at the Busan Asiad Main Stadium, the Steelers took a 1-0 lead with a mid-range shot fired by midfielder Lee Myung-joo from outside the penalty box in the 60th minute, but that lead only lasted for eight minutes.

Midfielder Lim Sang-hyub of the I-Park blasted an equalizer with his left foot from the center outside of the penalty box after defenders failed to clear the ball. Four minutes later, the 26-year-old Lim scored his second of the match in a corner kick situation, putting the ball into the right corner of the net after teammate Yang Dong-hyun’s header bounced off the goal post.

Yang scored I-Park’s third goal with a header 10 minutes later, again in a corner kick situation. “Our defenders certainly need to wake up,” said the Steelers’ Coach Hwang Seon-hong. “They often lost their concentration during the match.”

The Seongnam FC, led by 76-year-old Coach Park Jong-hwan, also failed to claim their first victory of the season as they drew 0-0 against FC Seoul at their home, Tancheon Sports Complex, in southern Gyeonggi. The Seongnam FC lost 1-0 to the Gyeongnam FC in the opening week. “I want to see my players scoring goals as much as our fans do,” Park said. “The match was one of my biggest challenges in my 49-year coaching career because it was my first home game in nine years. It will take a little more time to show my true football style since the players haven’t completely adapted to my strategies, so I want to ask fans to give their best support just like they have been.”