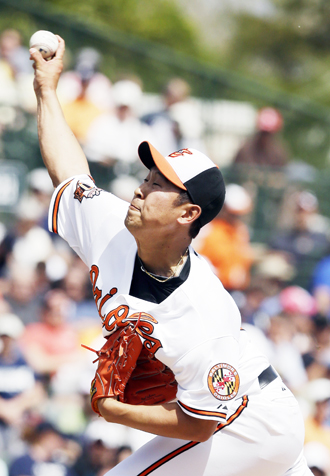 Yoon Suk-min of the Baltimore Orioles pitches in a preseason game against the New York Yankees in Florida on Saturday. [AP/NEWSIS]

South Korean right-hander Yoon Suk-min threw one shutout inning in his debut with the Baltimore Orioles, who got a home run from Chris Davis in a 2-1 victory over a New York Yankees’ split-squad Saturday.

The 27-year-old Yoon didn’t exactly face a Murderer’s Row of Yankees, who sent most of their stars to Panama for an exhibition game.

Yoon entered in the seventh with the score tied at 1. He gave up a single to Ramon Flores, then retired Mason Williams and Kyle Roller on fly balls. He ended his 11-pitch stint by getting Carmen Angelini to bounce out to second.

Yoon earned the win when Davis homered off Mark Montgomery in the bottom half. Davis has three homers in 22 at-bats after leading the majors with 53 last season.

Yoon’s first pitch was clocked at 91. On his next offering, Flores laced a looper to left.

“Overall, I gave up the hit. My control was better than expected, but I also feel like my fastball was 2 mph faster than I expected,” Yoon said.

Yoon went 73-59 with a 3.19 ERA in nine seasons with the KIA Tigers of the Korean Baseball Organization. Although that league is not comparable to the big leagues, it did serve to prepare him for this outing against the Yankees.

“I knew I’d be nervous, but I pitched nine years in Korea so overall I wasn’t as nervous as I thought I’d be,” Yoon said.

Yoon signed a three-year contract with the Orioles in February, but his debut was delayed by difficulties in obtaining a work visa. He hopes to ultimately be a part of Baltimore’s starting rotation, but he’s already got some ground to make up.

“It’s going to take about 20 days to get to midseason form,” he said.

Orioles Manager Buck Showalter liked what he saw in Yoon, especially under the circumstances.

“You know there’s a lot of emotion flying around there,” he said. “I thought he presented himself well the first time out. Think about the whirlwind he’s had in his life the last two months.”

New York got its lone run in the sixth inning, when Francisco Arcia homered off starter Chris Tillman to make it 1-0.

Vidal Nuno blanked Baltimore over four innings, allowing one hit and one hit with three strikeouts.

It was his second start this spring. The left-hander allowed one run in two innings against Toronto on March 2.

Tillman pitched five innings of two-hit ball before Arcia connected in the sixth.

He gave up three hits, struck out five and walked two. The right-hander has permitted one run or fewer in three of his four starts this spring.