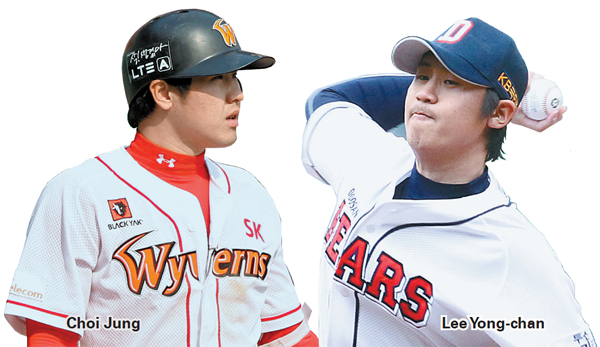 After the craziest hot stove season in the history of the Korea Baseball Organization, in which the league’s nine teams spent a record 53.2 billion won ($49.6 million), the clubs have tested their new lineups over the two-week preseason and are waiting for the 2014 season to begin on Saturday. The Pickoffs previews the Doosan Bears and SK Wyverns.

The Bears were on the verge of their fourth Korean Series title last fall when they took a 3-1 lead against the Samsung Lions in the best-of-seven series. But some questionable pitching changes by the Bears, combined with the Lions’ veterans stepping up, gave the title to Samsung.

The Bears then fired manager Kim Jin-wook, who led the team to the Korean Series for the first time in five years, and traded one of Kim’s favorite prospects, infielder Yoon Suk-min, for Jang Min-suk of the Nexen Heroes. They then let their three free agents - shortstop Son Si-heon, center fielder Lee Jong-wook, and slugger and first baseman Choi Jun-suk - leave the team.

But the impact of such changes might not be that serious, thanks to the Bears’ farm system, which is considered the best in the league.

When it comes to pitching, right-hander Lee Yong-chan is back after recovering from right elbow surgery that sidelined him last year. Lee was a starter in the 2011 and 2012 seasons, but the club will now utilize him as the closer.

When he was the closer in 2009 and 2010, he made 51 saves. If Lee adapts to his old role, the Bears will fix their biggest headache since their foreign closer Scott Proctor left the team after the 2012 season.

Veteran right-hander Jung Jae-hoon (14 saves and a 3.44 ERA) will be the eighth-inning man, while young relievers including Hong Sang-sam, Yoon Myung-joon, Oh Hyun-taek and Byun Jin-soo will fill the rest of the bullpen.

In a preseason game against the Hanwha Eagles on Friday, Volstad impressed fans with his four-seam fastballs reaching speeds of up to 146 kilometers per hour (90.7 miles per hour), along with his two-seam fastball, curveball and slider combinations.

Volstad will certainly be better than Garrett Olson (1-1 and a 6.52 ERA) and Derek Hankins (3-3 and a 6.23 ERA), who replaced Olson but was also a disappointment.

Having right-hander Noh Kyung-eun (22-18 and a 3.18 ERA in 2012 and 2013) and last season’s Cinderella lefty Yoo Hee-gwan (10-7 and a 3.53 ERA), the Bears have built a decent starting rotation. The club tested veteran Lee Jae-woo as their fifth starter, but he needs to improve his pitching control because he got himself into trouble in two preseason games, allowing six walks over seven innings.

The club’s team ERA of 4.57, which was the third-worst among the KBO’s nine teams, will certainly bounce back this season. Combined with a strong offense - last season their batting average was a league-best .289 - the Bears could be one of the toughest teams to beat this season.

Outfielder Min Byung-hun, who had a breakout season last year (.319 and 27 stolen bases) will take Lee Jong-wook’s leadoff spot, Son Si-heon will be replaced with Kim Jae-ho (.315 in 91 games) and a Mexican import, Jorge Cantu, who hit 104 home runs in 847 MLB games, will fill in for Choi Jun-suk.

The Incheon-based SK Wyverns had relatively a quite offseason. They re-signed lefty starter Jo-Jo Reyes, who went 8-13 with an ERA of 4.84 last season, then added right-hander Ross Wolf. Both received one-year deals.

Their biggest signing was Luke Scott, who hit 135 home runs over 889 MLB games. However, they failed to keep their leadoff hitter and gold-glove winning second baseman Jung Keun-woo.

Signing Reyes actually wasn’t a bad move. Before he joined the Wyverns last year, he was preparing to be a reliever in the MLB spring camp in 2013, meaning that he didn’t have enough stamina to play as a full-time starter. Manager Lee Man-soo said Reyes worked hard on improving his curveball and changeups in the offseason after having a tough debut season, with only fastball and slider combinations. Reyes allowed only one run in six and a third innings against the Kia Tigers on March 19, raising hopes he’ll have a good season.

The biggest concern for this young man is durability, but the lefty showed that he is physically ready. His fastball reached up to 150 kilometers per hour, and his slider was sharp like it used to be.

Foreign pitcher Ross Wolf is something of a mystery, though. He allowed eight runs in nine-and-a-third innings over two preseason games. He was not bad in his KBO debut against the Tigers, allowing three runs in five and a third innings on March 18. But he also allowed four walks so needs to work on his control.

Ross had a harder time handling the Bears on Sunday as he allowed five runs in the first inning; however, Ross learned that his grandmother passed away on Saturday, so perhaps he was dealing with that.

In the past, foreign pitchers without decent control command have not lasted long, even if they throw a 150 kilometer per hour fastball.

Their biggest problem is that their bullpen doesn’t have many reliable arms. Lefty closer Park Hee-soo (2-4 with 24 saves and a 2.27 ERA) still looks sharp, but they don’t have more decent relievers to support Park, save for Park Jung-bae (5-2 with 14 holds and a 1.65 ERA).

In hitting, it is questionable who will fill the hole left by second baseman leadoff Jung Keun-woo (now with the Eagles), who hit .301 and had 269 stolen bases in nine seasons with the team. The lead-off spot can be given to outfield prospect Lee Myung-ki, who spent much of last year sidelined after getting injured in May, but who hit .340 with a .391 on-base percentage in his 26 games batting second.

Possible candidates for the second base are Kim Sung-hyun and Choi Yoon-suk, both good fielders, but poor hitters.

The Wyverns hit .265 and scored 588 runs last year, both were fifth in the league. In order to score more runs, Kim Sang-hyun, who only hit .236 and had seven home runs last season, needs to bounce back and hit like he did in the 2009 season when he hit .315 and had 36 home runs with the Tigers.

But it looks like the team will heavily rely on Choi Jung (.316 and 28 home runs), Scott and outfielder Kim Kang-min (.301 and 10 home runs). The club will face a tough fight to make the postseason, but most likely they will miss out for a second year in a row.