A sea change in power generation

A sea change in power generation 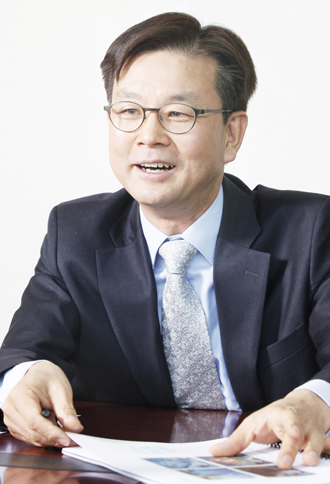 Park Jong-seon, founder and CEO of Renetec, at his office in Gangnam, southern Seoul. By Park Sang-moon

Renetec may not be a household name like Samsung and Hyundai Motor, but the company has been attracting attention from global players in the renewable industry as the developer of a power generator that uses tidal streams.

And Renetec is on the edge of a breakthrough - the first company in the world to commercialize tidal power generation - when results of its turbine test in deep water off the Orkney Islands in Scotland come in four to five months.

The turbine, which was set up in September, generates one megawatt of electricity per hour.

The renewable energy power generator is the product of a joint venture with Voith Hydro, which was established in 2007.

Successful commercialization of the turbine would lead to creation of a 200 megawatt tidal stream power generator in Jindo, South Jeolla, that could supply 180,000 homes.

In 2011, Renetec successfully installed a generator weighing 850 to 900 tons at a depth of 39 meters (128 feet) in the ocean off Jindo. The tidal stream power generator can produce up to 110 kilowatts per hour.

The Jindo project is the product of an investment of 110 billion won ($109 million), including 90 billion won from Voith Hydro.

The Korean company is in a fierce race to commercialize with major global players Andritz, Alstom and Siemens.

But unlike these big companies that began by acquiring small companies with specialized technologies in the field, Renetec started off as a small company and was able to develop its technology by partnering with Voith Hydro.

Park Jong-seon, founder and CEO of Renetec, says his company embodies the creative economy championed by the Park Geun-hye administration.

Even with no government funding since its founding 14 years ago, Renetec has developed a unique turbine exclusively for tidal stream generation through persistent research and development as well as help from major experts.

And it all started with a simple idea.

Surprisingly, the CEO doesn’t have an engineering background specializing in energy technology, rather he was a lawyer who practiced in Germany. After graduating from high school, he hopped on a plane for Freiburg, where he studied law. Focusing on business law, he began to take an interest in energy and the environment.

“When I was there in the early ’80s, Germany was already developing solar and wind power technology,” Park says. “It dawned on me that such renewable technology businesses should also be developed in Korea.”

His dream was realized through his search for a unique technology through tenacious research and development. Renetec has more than 130 patents, including its turbine that has no gear and operates without using fossil fuel. Its blade is designed to automatically adapt to changes in the direction of currents.

“Unlike solar energy and wind-powered generators, tidal currents are reliable, which makes them more cost effective,” he says.

So why hasn’t tidal power generation picked up?

The CEO says its a result of geography.

“Most renewable energy development started in Europe, particularly Germany, where there is more land and hills than water. Plus, rivers and streams generally don’t have strong currents that would lead to the development of such technology. The most important thing is the geography of the developing country.”

Germany’s geography, he points out, is advantageous for the development of wind power.

Korea, he says, is not a good fit for wind or solar. “Geographically, the wind in Korea is weak, and solar energy is also weak since the peninsula is located well above the equator. Even for hydropower generators to work, consistent and frequent rain is essential, but precipitation is concentrated in the rainy season.

“But one strength Korea has is strong currents.”

Park predicts commercialization of ocean current powered energy development will be even faster than solar or wind power, noting that hydropower has existed for more than 150 years. Given the technology that already exists, conversion to tidal power development will be shortened when development is in full swing worldwide.

Park says small and midsize companies like his have to expand their cooperation with international companies instead of relying on government support or trying to find local investors who tend to focus on short-term results.

“The problem in this country is that the energy business and machinery companies are long-term projects that take decades before a technology can be commercialized.”

He believes the development period for technology can only be shortened with the participation of large international companies and their know-how.

“Korea has become a global IT powerhouse with the help of the government since the Kim Dae-jung administration [in the early 2000s],” he says. “This was possible because the IT industry can generate results once it comes up with solutions. But energy development is different, as it takes a certain amount of time before the technologies could be commercialized.”

Park urges the government to customize support so that these industries can continue research and development while their technology development patents are protected.