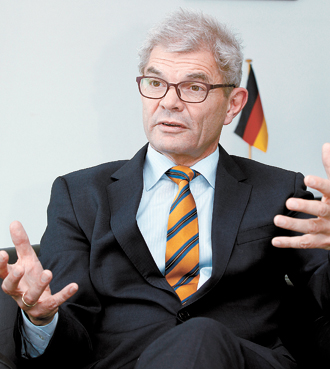 Germany is certain that President Park Geun-hye’s state visit there, which runs from today until Friday, will start a new era of close cooperation between the two countries, which have already seen 131 years of diplomatic ties, according to Rolf Mafael, the European nation’s top envoy to Korea.

“Ideally, we hope that President Park’s visit to Germany will launch the same dynamics that her father’s visit launched 50 years ago,” he said in an interview on Thursday at the German Embassy in central Seoul, referring to former President Park Chung Hee’s eight-day trip to West Germany in December 1964, which led Korea to come up with various blueprints for economic development that eventually spurred the splendid industrial growth of the 1970s and ’80s.

But this time, Korea hopes to gain insight from Germany on unification as well as boost economic and diplomatic ties.

“We see that next year will mark 25 years since German unification and 70 years since the division of Korea. Overall context is very important to recreate support and positive meaning towards Korea’s unification,” the ambassador said.

On top of separate summits in Berlin with President Joachim Gauck and Chancellor Angela Merkel, both of whom the ambassador says are very much interested in Korea, President Park will tour the Brandenburg Gate, Germany’s symbol of both division and unity.

Commending President Park’s efforts to change Koreans’ perception of unification - by saying unification would be “a jackpot” - the ambassador shared several pieces of advice for what steps will be necessary for Seoul to prepare for a unified Korean Peninsula.

A West German, Mafael recalled during the interview the large-scale, two-week family reunions that took place during his childhood at the end of 1963, two years after the Berlin Wall was established, and expressed hope that North and South Korea would hold bigger-scale reunions more often.

The following are the excerpts from the interview:

Q. What is the implication of President Park Geun-hye’s trip to Germany from Germany’s perspective?

A. We see that President Park Geun-hye and Chancellor Angela Merkel are both female leaders, and that President Park has a very good personal relationship with Chancellor Merkel. Both of them only just started their terms in office. The two of them have four years to work together on a bilateral relationship. President Gauck, who is [originally] from East Germany, was a member of the German-Korean experts group for unification before he became president of Germany and is very much interested in [affairs on] the Korean Peninsula.

What would the visit mean from an economic perspective?

We have seen that the relationship between the countries has been constantly increasing. From 2002 until 2012, the trade volume between the two countries has more than doubled, from $10 billion to $25 billion. Investment in both directions has increased enormously, and we are very eager to continue this development. We want to see more Korean investment in Germany and also want to see more German companies investing here in Korea. In that sense, we hope the meeting between business delegations as well as the meeting between ministers of economy will provide a renewed push.

Berlin was traditionally the city where Korean presidents made crucial announcements about North Korea. This time, President Park is expected to deliver an important message about unification and North Korea in Dresden. What is the importance of Dresden in this context?

It is very important for us that she will be visiting one of the centers of our former East Germany. Dresden is the center of Silicon Saxony [an industry association of nearly 300 companies in microelectronics and related sectors in Saxony] and has the largest number of Fraunhofer, or science and technology research institutes. This year marks 25 years since the Berlin Wall came down, so it is important for us to show to the world and Korea how the former East Germany has developed. The city is also a top example of how a city that was almost completely ruined and burned down has now been restored and possesses beautiful scenery. Lastly, Dresden over the last couple of years has shown consistently strong interest in building a relationship with Korea - with Daejeon, its science city, in particular. The two cities have a memorandum of understanding (MOU) for cooperation.

What did you think when you first heard President Park say unification would be a jackpot?

My immediate reaction was, “What was the Korean word she used?” It turned out to be “jackpot,” but I understand that the key message is that unification will bring happiness to all Korean people. I am very happy she chose this message, because since I arrived here [in October 2012], I thought people were still interested in unification, whereas the majority of younger people roughly under the age of 45 were showing very little interest. Lothar de Maiziere, the last East German prime minister, was in Seoul two weeks ago and told me that for the last couple of years, he has been quite frustrated that there is no longer an enthusiasm for unification, and that apparently South Korea seems to have given up the aspiration. I think it is very important and appropriate that President Park is changing the perception of what unification means. She is emphasizing the potential benefits of unification at the right time, both in terms of garnering support from the younger generation but also in the run-up to a visit to Germany. I believe whether people are in favor, or against or neutral about unification, today a very large majority of German people would tell you that unification is a success story and that unification made people happier. The economic figures clearly indicate today’s united Germany is stronger economically.

What preparatory steps do you think are necessary for Korea’s unification?

There will be three dimensions. First, you need international support - from neighbors in the region, in particular. Second, you need domestic support because people have to be eager to see unification succeed. Third, you need North Korea, which means either you have to find ways to cooperate with the leaders in the North so the border will be permeable, and the exchange of people and goods will be possible until a new spirit in the North grows. Or you need people like in Germany, who tore down the Wall. I believe the basic approach the president is taking with her trust policy, and those dimensions, are very promising.

What do you think of President Park’s drive to deregulate and scrap red tape?

The efforts to deregulate are welcome, and it is true that heavy regulations here in Korea are one of the impediments for investment. Not only the number of regulations, but also the quality of regulations and the consistency in implementation are important. We highly appreciate the free trade agreement (FTA) between Korea and the European Union, which turned out to be very successful. But we are, at the same time, worried that new regulations that have already been adopted or that are planned to be adopted - concerning security certificate requirements or the recognition of international standards, for instance - seem to be discriminatory or have a negative impact on foreign exporters.

The industrial sectors affected include the automobile, chemical, machinery and pharmaceutical [markets]. There seems to be a new non-tariff barrier (NTBs) emerging, and this could be a serous setback for our economic relations.