Gold in Sochi and not slowing down

Gold in Sochi and not slowing down 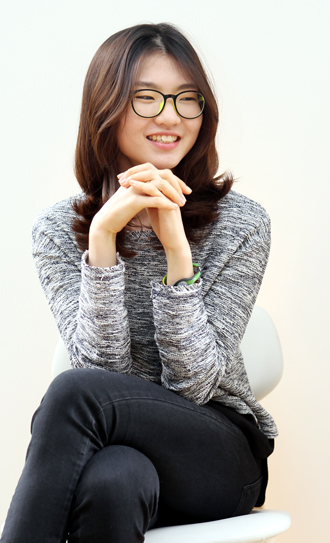 Seventeen-year-old short track skater Shim Suk-hee has been busy since the Sochi Winter Olympics. In addition to being a part of the gold-medal-winning women’s 3,000-meter team relay, she was overall champion at the World Short Track Speed Skating Championships in Montreal, Canada. Victor Ahn of Russia was the men’s winner.

Despite her success on the world stage, when Ilgan Sports sat down with the teenage Olympian last week in Cheongdam-dong, central Seoul, she seemed like just an ordinary high school girl.

Q. We heard that you’ve had a busy schedule. What have you been up to lately?

A. Well, after the end of last season, I experienced some new things. One of the most memorable things was a photo shoot with my teammates for a fashion magazine. It was a little awkward to pose in front of so many cameras, but everyone told me I looked very different in the photos. Some told me I looked gorgeous [laughs]. Also, I met actor Kim Woo-bin the other day. I was thrilled since he is my celebrity idol. He said some very nice things to encourage me. Overall, I have had a fun time, trying different things.

You won the overall title at the world championships last month. How do you feel about that?

To be honest, I never expected that I would be the champion. Everything was too good to be true.

Fans at home were fascinated to see your burst of speed to the finish line at the 3,000-meter Super Final. How were you able to do that?

I guess the hard work paid off. To prepare for the Olympics, I trained more than eight hours a day on the ice. Though people say I’ve achieved a lot for my age, I haven’t had the best race of my life. I still have a lot of room to improve.

We’ve noticed that you are a lot taller than other short trackers. Do you think that’s an advantage?

As I grew up, I heard it’s quite difficult for tall skaters to be as good as the others. But I try not to take that too seriously. Being tall sometimes helps me outrun other skaters. Well, everything depends on how I take it.

Many fans worry that Chinese skaters are becoming too competitive in races. What do you think?

It’s true that some Chinese skaters are overly competitive; when I pass the finish line, Chinese players almost always pull my uniform. You can actually check that in the instant replay [video], but they don’t get red cards for it. So I don’t really say “hi” to Chinese skaters at the ice rink. Well, I don’t speak Chinese in the first place anyway [laughs].

Tell us about the skates you wore at the Sochi Games. We heard they are quite meaningful to you.

In Sochi, I won the gold medal with the skates my older brother gave me. That pair of skates is so meaningful because they remind me of my family’s love. Over the years, my parents have always been behind me to support my skating career. Since I know they had to sacrifice a lot for me, I’ve always felt sorry for my brother.

What does short track mean to you?

I think skating is life itself. As I started skating at the age of seven, I’ve spent more than half of my life as a skater. So year by year, I’m trying to become more responsible on the ice.

What is your goal for the 2018 Pyeongchang Winter Olympics?

I aim to win a gold medal. Right after finishing the Sochi Olympics, four-time Olympic champion Chun Lee-kyung gave me a ring with the Olympic symbol. I was truly honored to get the gift because she is one of Korea’s most accomplished short trackers. Since then, I’ve been wearing the ring whenever I race. For the next four years, I’ll train even harder to reach to reach my goal in Pyeongchang.