Twins get some stability, offense

Twins get some stability, offense 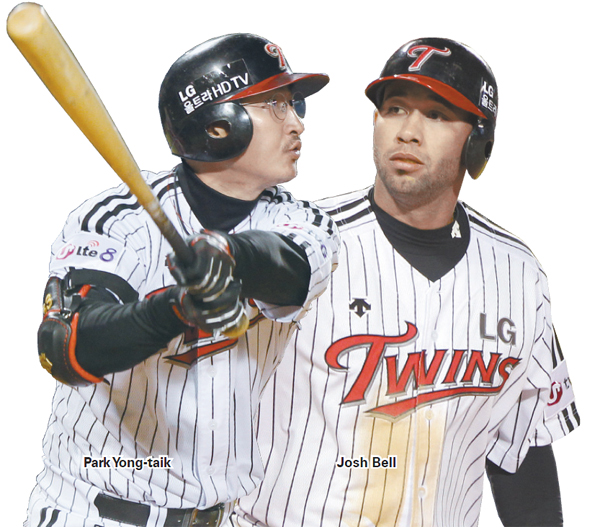 Last season, the LG Twins hit .282, the third-highest team average in the league, but manager Kim Ki-tae frequently changed his batting order after conferring daily with his coaches.

“I know that playing with a fixed lineup is a good thing not only for me but also for players,” Kim said. “But things didn’t work out that way last year.”

Going into this season, it seemed as though not much would change, but at least there are two batters whose names Kim should pencil into the lineup for every game: veteran outfielder Park Yong-taik in the leadoff spot and new foreign bat Josh Bell hitting cleanup.

In the four games since Saturday’s season opener, Kim used the same first through fourth hitters on his lineup card, and analysts say the stability has paid off.

The biggest difference in Park’s approach is that he is being more selective at the plate. Last season, he averaged 3.82 pitches per at-bat, compared to 4.3 pitches this year.

In Wednesday’s game against the SK Wyverns at Jamsil Stadium in Songpa District, southeastern Seoul, he had a hit and a walk.

“I’m trying to be a true leadoff hitter this season,” he said after the game. “I like that I walked in the bottom of ninth. My goal this season is to reach base twice in every game.”

Park’s hitting history more closely resembles that of a clutch hitter. He has a career batting average of .270 over 12 seasons and hit more than .300 for five consecutive years, the only KBO player to do so.

Park hit .328 last season, fourth in the league, and showed his clutch hitting in many games, including Wednesday against the Wyverns when he drove in two runs to break a 3-3 tie as the Twins went on to win 8-3.

During his career, Park has not walked much. One season, he focused on extra-base hits and home runs, and was always an aggressive hitter. The only time he had an OBP of .400 or more was in 2009 (.417), when he won the KBO batting title with a .372 average.

“Well, I lost 10 kilograms (22 pounds) to be a better leadoff hitter,” he said with a smile. He already has two stolen bases, after only 13 all of last season.

Bell has been another joy for Twins fans. After four games in the cleanup spot, the switch hitter has a .400 average with three home runs and seven RBIs, and leads the KBO in both categories.

In 2013, the Twins hit only 59 home runs, eighth in the nine-team league. Having Bell in the cleanup spot eases the long-ball pressure on veteran outfielders Lee Jin-young and Lee Byung-kyu.

Last season, the Twins used solid pitching (3.72 team ERA) to advance to the postseason for the first time in 11 years. This year, the offense led by Park and Bell should be a key factor in what fans hope will be the team’s second consecutive postseason appearance.