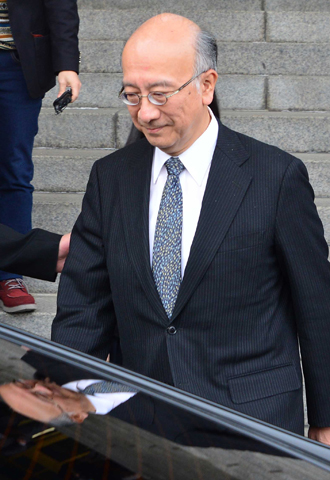 The Korean government yesterday “strongly denounced” Japan’s plan to significantly step up claims to the Dokdo islets in the East Sea in elementary school textbooks and said it was trying to distort history once again.

These four textbooks will be used in classrooms starting from April 2015. All four say that “Korea is illegally occupying Takeshima.”

Japan’s last elementary textbook evaluation process in 2010 only approved one out of five textbooks that included a specific reference to Japan’s territorial claim to Dokdo, and the textbook was used by less than a tenth of fifth and sixth graders.

The authorization came despite strong warning from Seoul, including by Foreign Minister Yun Byung-se Thursday, that such recalcitrant behavior will harm diplomatic relations between the two neighbors.

Japan’s move was criticized in separate statements from the Foreign Ministry and Education Ministry yesterday, as well as the ruling and opposition parties here.

“It’s been barely three weeks since Prime Minister [Shinzo] Abe vowed at the Diet that he will ‘uphold previous cabinets’ historical perspectives,’ but Japan should be warned that enforcing an education on elementary students that distorts and denies [Japan’s] history of imperialism and plunder is not only contrary to its own promise but can isolate Japan from the international community in the future,” said the Foreign Ministry spokesman in a statement yesterday.

He was referring to Prime Minister Abe’s statement at an upper house budget committee meeting on March 14 promising for the first time to uphold the 1993 Kono Statement, which effectively apologized for the Japanese Imperial Army’s forced recruitment of women into military brothels during World War II, as well as the 1995 Murayama Statement apologizing for Japan’s war aggressions.

Abe made those promises when he was eager to get Korean President Park Geun-hye to join a trilateral summit in The Hague with him and U.S. President Barack Obama, which she did.

The Korean Ministry of Foreign Affairs also lambasted Japan’s “Diplomatic Bluebook for 2014,” released earlier in the day, which identified Dokdo as Japanese territory. The annual diplomatic guidelines released by the Japanese Foreign Ministry further vowed to make efforts to resolve the territorial issue through international law in line with Tokyo’s previous stance. Korea’s Foreign Ministry warned that such “outrageous claims” will not only damage bilateral ties but endanger peace and security in Northeast Asia. First Vice Minister of Foreign Affairs Cho Tae-yong summoned Japanese Ambassador Koro Bessho to the ministry yesterday to lodge a formal complaint about the textbooks and the “Diplomat Bluebook.”

A foreign affairs official said that Cho told Bessho: “Takeshima does not exist for our people, only Dokdo.”

In their 20-minute discussion, Cho also recalled a statement made by Chief Cabinet Secretary Kiichi Miyazawa on history textbooks on Aug. 26, 1982, which stated that the Japanese government and people are “deeply aware of the fact that acts by our country in the past caused tremendous suffering and damage to the peoples of Asian countries, including the Republic of Korea and China, and have followed the path of a pacifist state with remorse and determination that such acts must never be repeated.”

The statement said Japan took into consideration criticism from Korea and China of historical descriptions in Japanese textbooks and will be more sensitive in the future.