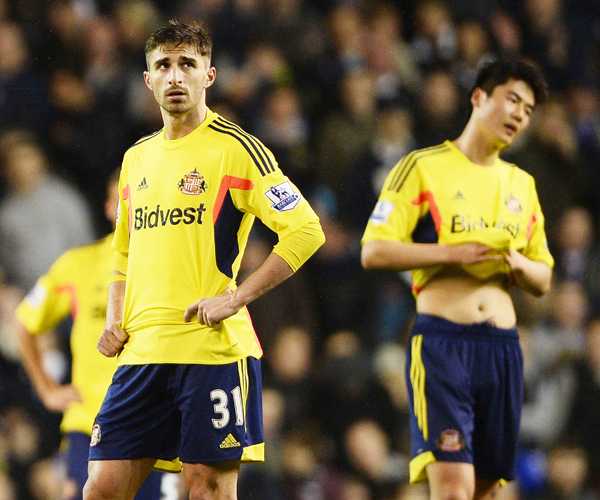 Christian Eriksen deflected some of the spotlight away from Tottenham Hotspur manager Tim Sherwood with two assists and a goal in his side’s 5-1 hammering of relegation-haunted Sunderland in the Premier League on Monday.

With reports suggesting Sherwood’s job was in jeopardy after recent woeful performances, Tottenham responded in style, recovering from going down to sweep aside a demoralized Sunderland, which remain rooted to the foot of the table.

Emmanuel Adebayor scored twice with Harry Kane also on target at home, but it was Denmark’s Eriksen who was instrumental in reviving Tottenham’s flickering hopes of finishing in the top four.

The victory lifted Tottenham back above Manchester United into sixth place although it remains five points behind fourth-place Arsenal with five matches remaining and four behind Everton, which also has a game in hand.

“I would rather talk about the game,” said Sherwood, who was given an 18-month contract in December when he stepped up from coaching the Under-18s to replace sacked Andre Villas-Boas.

“I can’t comment on anything regarding my employment to be honest, you’ll have to ask my employers about that, but as far as I’m concerned I set the team out well tonight and we outplayed Sunderland and did the job well tonight.”

Sunderland was gifted a 17th minute lead when Lee Cattermole shot home his first goal for the club in four years after a defensive mixup involving Hugo Lloris and Vlad Chiriches.

It briefly raised hopes they could begin a great escape, but by the end of the game the northeast side looked resigned to its fate, seven points behind fourth from bottom Norwich City, albeit with two games in hand.

With Eriksen - one of a raft of big-money signings for the Spurs this season - pulling the strings in midfield, the hosts responded with Adebayor bundling in Eriksen’s cross after 28 minutes to send the sides in level at halftime.

Kane put Tottenham ahead on the hour, stealing in to convert another lethal Eriksen delivery before Eriksen made the points safe with a shot that deflected off Phil Bardsley past Vito Mannone.

Former England and Spurs midfielder Sherwood was his usual animated self on the touchline and did not have the look of a man who was about to lose his job, particularly when Adebayor and substitute Gylfi Sigurosson gave the scoreline a healthy glow with late goals.

“No matter what happens to the manager, I respect him, I’m very happy to be back on the pitch scoring goals,” said Adebayor, reintegrated into the side by Sherwood having been banished by Villas-Boas.

“He has been a big part of my life, when everyone forgot me he brought me back in and gave me my life back. I hope he stays but I am not the chairman, I just need to keep focused on the job in hand and scoring goals.”

Netherlands manager Louis van Gaal has been linked in the media to the Tottenham job in recent weeks after thrashings against Chelsea and Liverpool in quick succession seemed to have scuppered the London side’s hopes of qualifying for the Champions League.