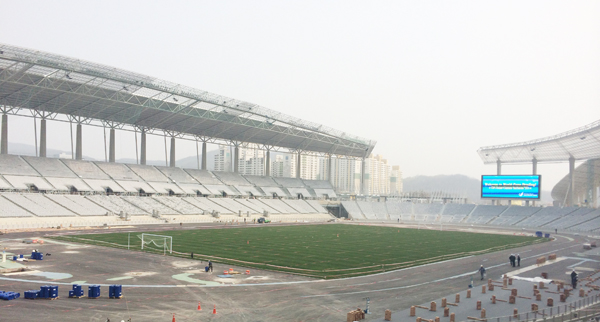 The Asiad Main Stadium in Seo District, Incheon, yesterday. The new facility will be completed by the end of the month. By Kwon Sang-soo

INCHEON - The Incheon Asiad Main Stadium, which will stage the opening ceremony of the 17th Asian Games, was unveiled to the media for the first time yesterday.

In the World Press Briefing held at the Incheon Songdo Convensia, representatives of about 200 media outlets around the world had a chance to view preparations for the Incheon Games, which begin on Sept. 19 and continue for 16 days. About 13,000 athletes from 45 Asian nations will compete in 36 sports including football, baseball, archery and taekwondo. The opening ceremony starts at 7 p.m. with the theme “Meet the Bright Future of Asia.”

The five-story (one underground) main stadium was built on 100,500 square meters (25 acres) of land and has a capacity of 62,848 people. The three years of construction work will be completed by the end of April. The stadium is now about 90 percent complete, according to the Asian Games Organizing Committee.

“We are pleased to inform you that our new facilities are well prepared for the Incheon Games,” Kim Young-soo, the president of the organizing committee, said at the press conference. “The Incheon Games will be more than just a sports festival. It will be a grand celebration that all 4.5 billion Asians can enjoy in harmony and friendship, uniting Asia as one.”

On June 1, the brand new venue will host a friendly football match between Korea and Kuwait. A concert including K-pop and Korean traditional music is scheduled on June 11, 100 days before the opening, to beef up the mood for Asia’s sporting showcase.

Preparation for the Asian Games seem to be in good shape; 10 new sports venues, including Munhak Park Tae-hwan Aquatics Center, Yeorumul Tennis Courts, Namdong Gymnasium Asiad Rugby Field and Gyeyang Asiad Archery Field, were completed about a year before the start of the games.

Park Tae-hwan, 25, the 2008 Beijing Olympics gold medalist in the men’s 400-meter freestyle, will compete with Sun Yang of China, who took gold in that event in London in 2012.

The organizing committee also showed off yesterday the Main Press Center and the Media Village in Incheon’s Namdong District, which will accommodate about 2,900 media staff.

The torch relay begins on Aug. 5 in New Delhi, the cradle of the Asian Games, and will arrive at Incheon on Aug. 15 after traveling through Kuwait, Vietnam and China. The torch will then travel to 17 cities in Korea before it arrives at the Asiad Main Stadium on opening day.

The Incheon city government says it will use the main stadium as a sports and cultural space after the games. In addition to the athletic facilities, the complex will house movie theaters and shopping malls.

The biggest remaining issue for the host city is accommodations for visitors. The organizing committee chief told the Korea JoongAng Daily in January that Incheon needs about 200,000 rooms, but only about half that number is available in areas close to Incheon. The committee said it is arranging options such as temple, church and home stays. Shuttle buses will carry athletes and media members to and from the stadium; financial problems scuttled plans to build a subway line to the new stadium. When the Korea JoongAng Daily took a shuttle bus from the Main Press Center to the main stadium, the trip took about 40 minutes.

“Since we want to attract more than two million visitors, we will try to provide every convenience necessary to make this event a success,” a spokesman of the organizing committee said.