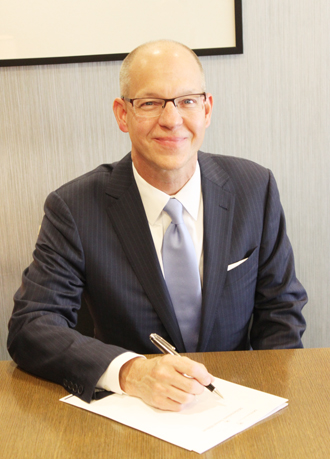 Ray Johnson, vice president and chief technology officer of Lockheed Martin, visited Korea to launch a fund and mentoring program for science and engineering students. The program started accepting applications yesterday and will continue until June 4. Provided by the company

Ray Johnson, senior vice president and chief technology officer of Lockheed Martin, one of the world’s largest aerospace and defense contractors, said the company is looking to broaden its research and development scope through a program with Korean engineering students.

“We’re looking forward to start co-developing technologies with Korean partners from universities in various areas that not only satisfy corporate interests but also contribute to the Korean creative economy, as well as the technology solutions required by Korea,” Johnson said in an interview with the Korea JoongAng Daily on Wednesday afternoon.

The Lockheed Martin CTO visited Korea to launch a project fund called RoKST&R (pronounced “rockstar”), to support Korean science and engineering students as the company tries to strengthen its place in the Korean market. It aims to make the fund for science students a jumping off point toward a potential joint research and development project with Korean universities. The company will provide students with financial and technical support from its headquarters in the United States. It is also building a new engineering curriculum in system engineering at the Korea Advanced Institute of Science and Technology (Kaist).

“Lockheed Martin provides global security solutions, one of the most challenging problems in the world, and Korea is one of two places that suffers most with the problem, along with the Middle East,” he added.

The open competition for project abstracts began yesterday and will continue through June 4. The company will be selecting feasible projects, but it hasn’t decided on the number of finalists or the size of the fund.

Q.What made you choose Korea as a research and development partner over other Asian countries?

A. Rather than looking for a home for this program between countries in Asia, the program initially had a focus on Korea. We were wondering what kind of program can we start that takes advantage of the opportunities that we see and that’s represented in President Park Geun-hye stating goals in creative economy to focus on innovation, education and opening up regulations for businesses. The very good educational system in Korean universities and talents developed there drive our desire to continue to partner with Korea as we have for the past five decades in providing security in the Korean peninsula. We understand how serious the security environment here can be.

Is this your first time holding this kind of program in another country?

In the past, we held a similar program in India, but no joint technology development took place there [business-wise], while such efforts will be undertaken here in Korea.

If you find great talents in the process, do you have any plans to hire them?

It could happen if we identify talent, but we don’t want to be viewed as putting this program in place as a recruiting tool. Instead, we’re co-hosting a complex systems engineering workshop with Kaist and Stevens Institute of Technology, a New Jersey-based engineering school known for its systems engineering skills and background. We aim to help Kaist recruit complex systems engineers and place them in the Korean industry. So, we would help our partners identify the educational need in order to create a stronger Korean work force for organic capability that we can collaborate with jointly in the future. Stevens will give system engineering education advice to help Kaist define a curriculum for a new degree program.

This program supports research and development projects in seven areas, among which some are not related to defense and aerospace. What led the company to turn to adjacent technology areas?

I think it’s important to point out that the world aerospace market is only one of the areas that we are interested in, because global security needs around the world are changing.

Under this program, we’ll be soliciting inputs for projects in fields as diverse as nanotechnology and renewable energy sources, things that are not related to the aerospace industry.

Do you think there is enough aerospace education in Korea?

I’ve been actually impressed at opportunities in specific kinds of aerospace engineering, I would say complex systems engineering activities. Korea is very stable and mature in its education system. We, Stevens and Lockheed Martin, could help Korea go to the very next level, and that’s what Kaist has recognized as well.

How will Lockheed Martin benefit from this program?

Unlike in the United States where the defense decisions are principally decided by the Department of Defense, the decision process, internationally, is decided on collective efforts among many stakeholders. This program will allow us to have better relationships with some of the other stakeholders, who educators know in the industry, rather than just the defense officials.