Taking a bike ride between North and South

Taking a bike ride between North and South 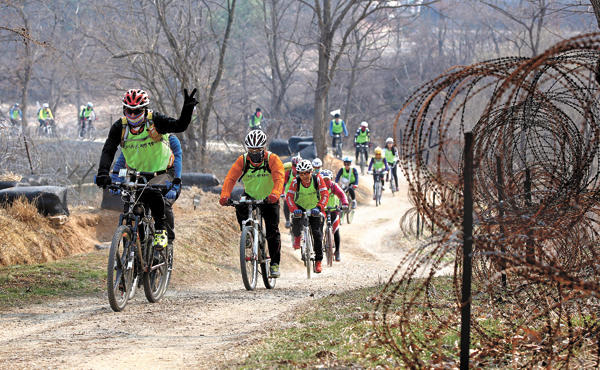 Participants of the DMZ Bicycle Tour ride along the usually restricted Civilian Controlled Area, which will be opened for the event once a month until October. By Ahn Seong-sik

If you’re up for the thrilling experience of going into a restricted area near the demilitarized zone in Gyeonggi, it’s time for you to join the riders of the DMZ Bicycle Tour.

The Civilian Controlled Zone behind Imjingak, which is only seven kilometers (four miles) from the DMZ separating South and North Korea, is open to bicycle riders once a month until October for the DMZ Bicycle Tour.

The idea of getting into a normally restricted space has been very popular, especially during the spring season when many people are eager for outdoor activities. The organizer, Gyeonggi Tourism Organization, decided to offer two tours this month - one more than usual. It allows 300 people to participate in each event, and the tours taking place tomorrow and April 27 are at full capacity. The next event is May 25 and applications will be accepted from April 28.

The DMZ Bicycle Tour is the only regularly scheduled program, although local companies and the regional government have offered one-off events for bicycle lovers. The regular tours will continue through October on the fourth Sunday of each month.

The first tour this year was held late last month. The JoongAng Ilbo participated in the program and this reporter rode the entire 17.2-kilometer course.

Riding wasn’t any easier than expected because about 80 percent of the course was unpaved. But the entire trip was worthwhile because it hammered home to me the fact that Korea is divided in two with a demilitarized zone in the middle.

Imjingak Park, where the tour begins, was filled with families and friends welcoming the early arrival of spring. The park is a popular tourist destination and around five million people visit each year to see the aftermath of the tragic history of Korea’s division.

With the weather becoming warmer, many were eager to take full advantage of the rare chance to ride a bicycle in the controlled area.

Riders take a break at a checkpoint, left, after they cross Tongil Bridge, also known as Unification Bridge, right, within the Civilian Controlled Zone. By Ahn Seong-sik

“Usually we need about two weeks to fill up the slots, but this time they were full within a week,” said Hong Jae-geol, an operations team official at the Gyeonggi Tourism Organization.

Thirty minutes past noon, people started to register at the information desk. They included a group of 60 high school students from the nearby city of Paju, Gyeonggi, and some members of a bicycle club who brought their gear on a chartered bus from Pyeongtaek, Gyeonggi.

After registering, each biker received an identification card that uses radio frequencies to check the location of each participant. Each biker attached the card to his or her riding gear. Sensors along the riding course track each participant.

Riders also got a bright green vest to wear so they could easily be spotted.

The tours were started in 2010 and have never been canceled even when relations with North Korea got chilly.

“I have been leading groups since the first event, but I still feel nervous and excited to go through the Tongmun gate, which is guarded by soldiers,” said Hong Jae-geol, the director, as he waited to ride through the gate.

Imjingak Park had been filled with people picnicking with lunch boxes on lawns and children running around. But inside the controlled zone, everything was silent, as if time had stopped.

After riding 1.2 kilometers along the military patrol route, riders approached the Tongil Daegyo, also known as Unification Bridge. It is the very bridge that was crossed by the late Chung Ju-yung, founder of Hyundai Group, when he visited North Korea along with a herd of 1,001 cows in 1998.

The bridge is usually controlled and anyone wishing to cross it in a car needs to be questioned and searched. Of course, crossing the bridge on foot or on a bicycle is not allowed.

I was able to ride across the bridge without any interference.

I continued riding past Tongil village, a town of civilians who live within the Civilian Controlled Zone, until I reached a three-way intersection. At the spot, I faced a signed reading, “Go straight for Panmunjeom, turn left for Kaesong.” Workers at the Kaesong Industrial Complex go through the same road, usually only used by local residents, tourists and military vehicles.

I started to slow down to get a better view of what surrounded me until I reached a checkpoint labelled 60T.

At the checkpoint, I was very close to Chopyeong Island, which is now isolated. After the end of the 1950-53 Korean War, not only civilians but also soldiers avoided stepping on its land as a massive number of mines were known to be buried on the island.

I got to ride one more kilometer to 64T, a route newly added for this year’s tours. Then I headed back to the starting point at Imjingak to end my hour-and-a-half bicycle tour around the controlled area.


*The DMZ Bicycle Tour is held on the fourth Sunday of every month until October. The next available tour is on May 25 and interested parties can apply after April 28 online at peace.ggtour.or.kr.