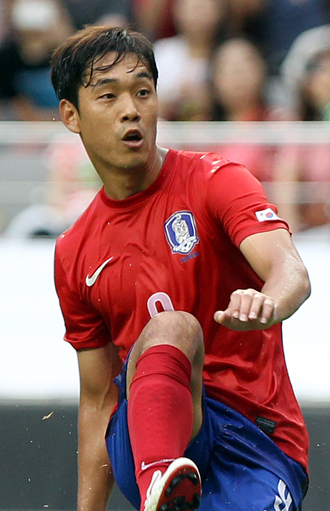 It looks like striker Park Chu-young’s season in England has ended, not because he is seriously injured, but because he wants to prepare for the 2014 Brazil World Cup that kicks off in June.

On April 3, the 28-year-old returned to Korea to treat a skin disease on his right foot and his physician Song Jun-seob said he needs about two weeks to completely recover. Since the Championship League in England ends on May 3, Park was supposed to rejoin Watford FC as soon as he recovered.

But Park isn’t interested in buying a ticket back to England. Korean national football team coach Hong Myung-bo said on Monday that Park will stay in the country to prepare for the World Cup with the team’s fitness coach, Ikeda Seigo.

Hong said Park won’t be able to play for Watford because he needs at least a week or two to get back in shape after his foot heals. He said that Park will soon hold a press conference to talk about his issues regarding Watford and the national team, but the Korea Football Association hasn’t specified a date yet.

Since Hong became national coach last year, he has been strict in managing his players. He ordered every player to wear a suit when they gather at Paju training camp before A-matches and declared that he will only call up players who have regularly played for their own teams.

The suit policy worked well, but the call-up policy didn’t. In February, Hong brought in Park to play in a friendly match against Greece held on March 6. It was the first time in 13 months that Park had played on the national team and he made a huge comeback, scoring a goal to secure Korea’s 2-0 victory.

Before the match, Hong was ridiculed for adding Park to the team because he has played fewer than 10 matches for Watford and Arsenal in the past two seasons. People said that Hong had a difficult time finding a decent striker and broke his own policy by giving Park a chance to play.

But more drama has come from Hong’s comments earlier in the week.

The coach hasn’t announced his final 23-man roster for the World Cup. The Korean Football Association, the governing body of Korean football, said the roster will be announced on May 9, but Hong’s remark that Park will spend time with assistant coach Ikeda means that he will take one of the 23 spots.

And Park has likely ruined his reputation by deciding not to go back to England. He is currently on loan to Watford FC from Arsenal, and Watford said it wants Park back before the season ends. It is unclear whether Park has told the club that he will not return.

“This is the second time that Park has come back to Korea before the end of a season,” an analyst who requested anonymity said. “He was fined for making such a move when he played for Celta Vigo of Spain. This will impact other young Korean players knocking on the door of European leagues. What I heard was that he wants to perform his best in the World Cup so he can escape from Arsenal.”