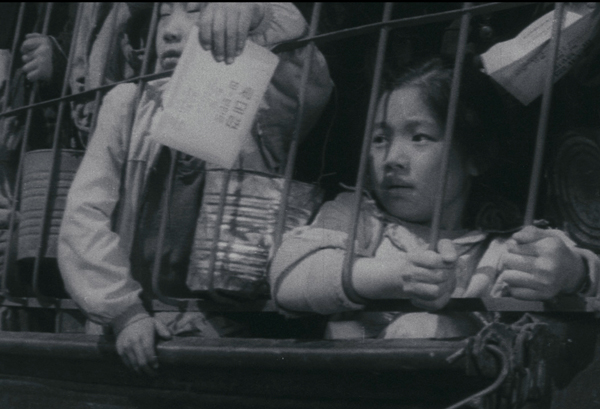 “Sorrow Even up in Heaven” will be shown next month. Provided by KFA

When “Sorrow Even up in Heaven” was released in 1965, the nation cried with Yun-bok, an 11-year-old boy who begs, sells gum and polishes shoes to feed his three younger siblings.

The tear-jerker was then the second-most viewed Korean film, attracting about 28,500 people in Seoul alone. Korean Film Archive (KOFA) Director Lee Byung-hoon said that number would equate to “around 1.5 million admissions by today’s standards.” So when the movie went missing, it was deemed a great loss for Korean cinema.

But a copy of the film’s negative recently turned up in Taiwan, exciting Korean film lovers everywhere.

A press conference was held yesterday to mark the occasion. Lee was joined by the film’s director, Kim Su-yong, and Kim So-young from Korea National University of Arts, who played an instrumental role in locating the negative.

KOFA knew that the film had been exported to Taiwan, so it asked the Chinese Taipei Film Archive to look for it way back in 2003. It took 10 years, but eventually the search turned up a copy.

“I visited Taiwan in 2013 and found the film had been archived there under its Chinese title,” said Kim So-young. “After help from the CTFA, we were able to get the negatives, and last month we were given the reels.”

After that, KOFA got to work restoring the movie and now, for the first time in nearly 50 years, people can see the famous film. Luckily, apart from a few scratches, the film is in good condition and still maintains the Korean-language audio (a rarity for exported films at the time).

Based on the diary of a boy named Lee Yun-bok, who lived from 1951 to 1990, the film is centered on a poverty-stricken family in Daegu and the 11-year-old boy who keeps the clan together.

For years Yun-bok believed that poverty was a fault inherent in him, but a teacher gradually shows him how dignity and self-respect can come without money or a full stomach. It’s a story filmmakers have returned to repeatedly. Kim remade the film in 1984 and another version was made in 2007, although neither version was as popular as the original.

The child actor Kim Cheon-man, who played Yun-bok, was heralded as a prodigy for showing a wide range of emotions.

The public will be given a chance to see the film when it screens at KOFA’s headquarters in western Seoul next month during a film festival held to mark the organization’s 40th anniversary.