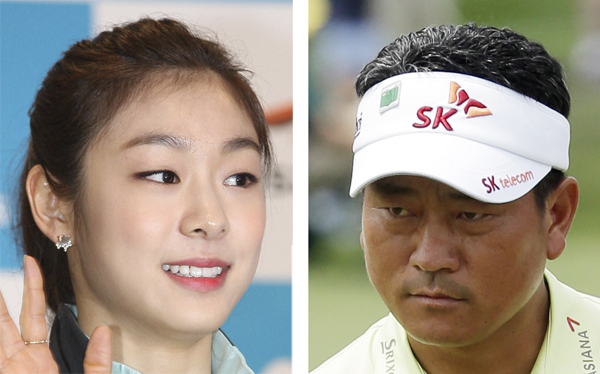 Since the Sewol ferry disaster that killed more than 100 people in Jindo, South Jeolla, Korean athletes playing abroad have expressed their condolences.

Football players including Son Heung-min of Bayer Leverkusen and Kim Bo-kyung of Cardiff City wore black armbands on the right sleeves of their uniforms and have refrained from celebrating a goal assist or a match win.

But from thousands of miles away, athletes want to give more than just condolences while their nation is grieving the loss of so many teenagers.

Golfer Choi Kyung-joo, or K.J. Choi, 44, said yesterday he will donate 100 million won ($96,160) to Danwon High School. More than 200 students from the school were on board the Sewol for a school trip and many are still missing.

“I feel so sorry for losing these young students,” Choi said through his K.J. Choi Foundation, which gives out scholarships.

“After I watched many news reports that the students who survived need many types of treatment, including psychotherapy, I wanted to help them. They are similar in age to my oldest son.”

This isn’t his first time helping young people in Ansan. He opened three libraries in the city last year to give students a place to study and spend time after school.

Ryu Hyun-jin of the Los Angeles Dodgers has also contributed. After donating 100 million won last week, he held a charity autograph event for fans on the edge of the Dodger Stadium parking lot on Tuesday.

“Ryu decided to donate the funds, and he hopes the money can be used to purchase equipment for rescuing students in the cold water,” said A-Spec Corporation, the agency managing Ryu’s activities in Korea.

Figure skating darling Kim Yu-na gave 100 million won to Unicef, where she works as an honorary ambassador. She also made a donation after the 2010 Haiti earthquake, the 2011 Japan earthquake and the typhoon in the Philippines in 2013.

Baseball stars in the Korea Baseball Organization have also joined in on the donations.

“I didn’t want people to find out about my contribution because I only did it as a father who is raising three children,” said Jung. “I really hope the students fighting against fear inside the ferry come back home safely.”