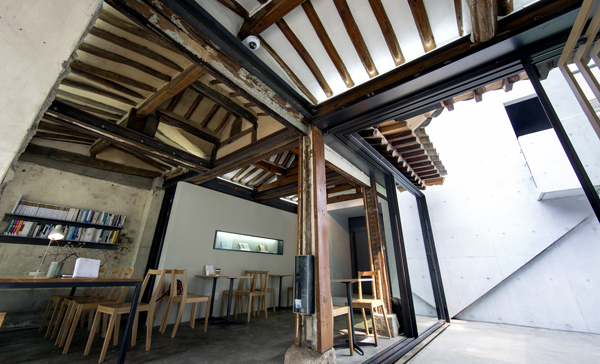 The House of Yi Sang, located in Tongin-dong, Jongno, central Seoul, has reopened after a yearlong renovation. Although the famed author Yi Sang (1910-1937) didn’t live in this home, he lived on the land for 20 years. The House of Yi Sang is one of the few remnants left of the famous author, whose writings were considered too avant-garde for their time. By Ahn Sung-sik

The House of Yi Sang reopened after a yearlong renovation on April 12, creating a space that is open to all manner of cultural events.

Although the humble hanok, or traditional Korean house, is not the same building in which Yi Sang (1910-1937) lived, it is located on the same land where the famous writer lived for 20 years of his all-too-short life.

Yi lived here in Seochon, just west of Gyeongbok Palace in central Seoul, until he turned 23. His uncle, who was without a son, adopted Yi and raised him in the house. But after the uncle died, his home was torn down and replaced by the hanok that stands there today.

Nevertheless, The House of Yi Sang is still significant, providing a connection to the famous author, who wrote such avant-garde works as “The Wings” and “Crow’s Eye View” (both of which are available in English editions).

Yi also had a yearning for modernism and wanted to travel to Paris, but he was never able to go.

On one trip to Japan he was imprisoned and later died of tuberculosis at age 27 in Tokyo.

“After his death, his wife, Byeon Dong-rim, discarded all his possessions after she remarried. We don’t even know where he was buried,” said Lim Hyung-nam, an architect who used to live in Seochon, an area that was home to many scholars and artists, including the painter Lee Joong-seop (1916-1956) and the poet Yun Dong-ju (1917-45).

Lim was one of the many people who were against the idea of removing the hanok built on the site of Yi’s childhood home in 2011 when the National Trust for Cultural Heritage, the owner of the plot, was pushing a plan to build a new memorial space for the author. 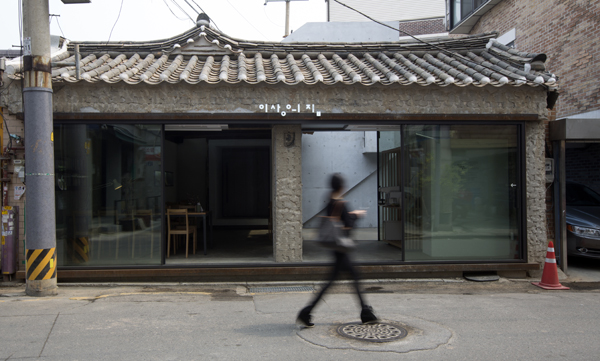 The exterior of The House of Yi Sang is little changed from recent renovations. Unfortunately, the original home, in which Yi lived with his uncle, was demolished right after his uncle’s death.

“The site is the only thing we have about him,” Lim said.

Eventually, the National Trust for Cultural Heritage and Arumjigi Culture Keepers Foundation, a nonprofit organization devoted to protecting and preserving Korea’s traditional culture, agreed to making some minimal changes to the hanok, which has been on the site for the past 80 years.

The exterior of The House of Yi Sang is mostly the same as ever, but the interior has been remodeled.

“We’ve removed controversial parts of the house, the illegal additions, such as two rooms in the back,” said Lee Eun-jeong, the Arumjigi representative for The House of Yi Sang.

Behind a heavy, charcoal-colored iron door at the back of the house, visitors come across a dark and narrow staircase that leads up to a small space called the room of Yi Sang. According to Arumjigi, the space is quite similar to a room where Yi used to live and write while his lover, Geum-hong, worked at a coffee shop.

Inside the room a video about the author is screened.

Through the room, visitors are able to go onto the rooftop for a view of the other low-rise, Seochon hanok clustered in the area.

Inside The House of Yi Sang, visitors can check out Yi’s works, including the first edition of the “Yi Sang Complete Collection,” which was published in 1956.

Or people can simply walk in and sip the complimentary instant coffee mixes and tea, just as Yi did at Jebi Dabang (literally, “Swallow Tea House”), which he ran in Jongno back in 1933. At the time, Jebi Dabang was a popular hangout for the literati of the day.

Diverse performances and lectures on literature will be held throughout the year. More details about the schedule will be updated on House of Yi Sang’s website at www.isang.or.kr (Korean only).

To get there, go to Gyeongbok Palace Station, line No. 3, exit 2. After about 200 meters, take the alley on the left at the Woori Bank.