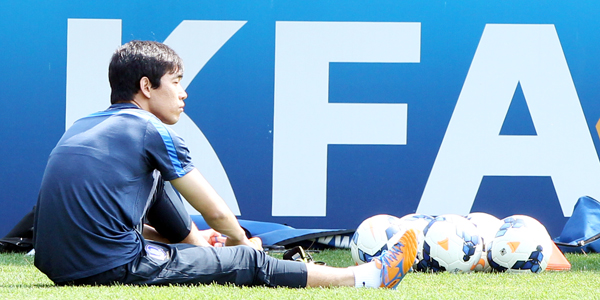 PAJU, Gyeonggi - Striker Park Chu-young of Watford FC said he will stay in Korea for the remainder of the season because he has not completely recovered from an injury and needs time to prepare for the 2014 Brazil World Cup in June.

The 28-year-old went to the National Football Training Center in Paju, northern Gyeonggi, to train with national team fitness coach Seigo Ikeda and spoke with the media for the first time since his return to Korea. Because his injury - a skin disease on his right foot - has not fully healed, Park said his training session wasn’t intensive, but he had no problem wearing football shoes. Rumors have been flying that Park wasn’t even able to wear his shoes due to the disease.

Park said it was necessary for him to speak to the press because of rumors that he would stay in Korea.

On April 3, Park returned to the country for medical treatment, but he didn’t divulge details of his plan for the rest of the season at Watford FC. Then, Hong Myung-bo, head coach of the national team, said Park will be training with Seigo, to which many reacted by saying that Hong and the Korea Football Association are giving too much special treatment to Park.

Some said that letting Park practice with the fitness coach meant he had already been guaranteed one of the spots on Hong’s 23-man squad for the World Cup. The lineup is scheduled to be announced on May 9 by the KFA.

“I understand that some people are criticizing me for being in the NFC center, which is only for national team members to use,” Park told reporters at the edge of the NFC field.

“If people don’t want me to be with coach Seigo, I will not do it, but I want to ask people to be understanding of the situation because this is the best way for me to prepare for the World Cup.”

Regarding his injury, he said: “It’s getting better every day, though I can’t say I’m 100 percent physically. If I do what my coach and physician tell me to, I think I will be in good shape soon.”

Park said it was not an issue for him to stay in Korea for the rest of the English season because he already spoke with the team doctors at Watford FC and Arsenal FC and they agreed Park could return to Korea. He is on loan from Arsenal to Watford.

“I discussed the [injury] issue for about two weeks with them [Watford and Arsenal], so they know what I’m doing,” he said. “We all know it is impossible to be back on the club’s roster before the end of the season.”

The Championship League ends May 3.

The KFA held a separate press conference at the NFC with Seigo to explain Park’s condition.

“Park will be in a rehabilitation for about a week starting today,” Seigo said. “We say we are optimistic about his condition, though he is still not healed 100 percent. It looks like he has been doing his best to put himself in a good shape. His body fat hasn’t increased at all from the time I saw him last [in March], though his muscles have decreased a bit. We will increase the level of training intensity after improving his stamina.”