Ryu gets roughed up in 6-1 loss

Ryu gets roughed up in 6-1 loss 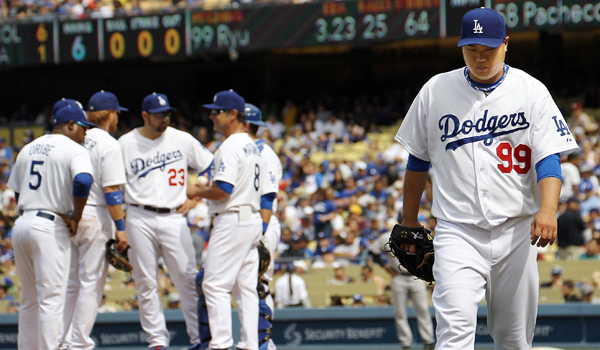 Ryu Hyun-jin leaves the game Sunday after allowing a three-run home run to Josh Rutledge of the Colorado Rockies in the top of the six. By Shin Hyun-sik

In the game against the Colorado Rockies at Dodger Stadium on Sunday, local time, Ryu allowed six runs in five innings. He gave up nine hits, including a home run, as the Dodgers lost, 6-1, and failed to win their 10,000th game.

Judging by his fastball speed, Ryu looked tired, and four days of rest weren’t enough for him to perform his best on the mound. Ryu’s average fastball speed in his first four appearances of the season was 90.5 miles per hour, but the average speed against the Philadelphia Phillies last week was 89.4 miles per hour.

Ryu got himself into trouble right away when he started the game by allowing two singles. But he got out of the jam by getting Carlos Gonzalez out on a flyball and striking out Troy Tulowitzki before Justin Morneau popped out to end the inning.

The Dodgers grabbed a 1-0 lead in the bottom of the first with Adrian Gonzalez’s RBI single, but it didn’t last long as Ryu swerved up a two-out, two-run single to Brandon Barnes with runners on second and third

Ryu threw 46 pitches in the first two innings. He gave up another run in fifth and three more in sixth. Ryu allowed a three-run home run by Josh Rutledge with Morneau on third and Nolan Arenado on second and no outs before Dodger manager Don Mattingly pulled him out of the game.

The home run to Rutledge was the first Ryu allowed this season.

“I had a hard time controlling my pitches,” Ryu said after the game. “I didn’t have any [physical] problems, but you sometimes get a day like this. Many things just didn’t work out well.”

Ryu has been telling media that he doesn’t have any problems with four days of rest between starts, and last season his ERA was 3.26 in games he pitched on four days’ rest.

This season his ERA is 9.69 (14 runs in 13 innings) on that schedule. In 26 innings of work in games he started on five days or more of rest, Ryu has not allowed a run.

If his numbers are any indication, Ryu also is not a fan of day games.

“I know that people worry about my four-day break thing, but I really don’t have any problems with that,” Ryu said.