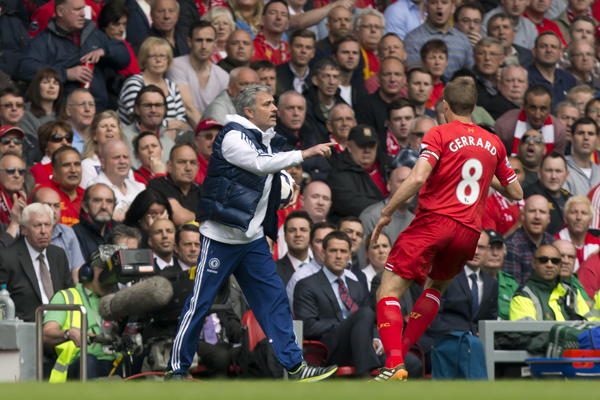 Liverpool’s hopes of winning its first title in 24 years suffered a huge setback when with a 2-0 loss at home to Chelsea and a 2-0 Manchester City victory at Crystal Palace.

In the latest twist of a fascinating Premier League season, under-strength Chelsea cut the gap at the top to two points with two games to play in a tactical triumph for manager Jose Mourinho.

Mourinho immediately ruled his team out of contention, but the result boosted the title aspirations of third-placed City, which closed the gap on the leaders to three points with a comfortable victory at Palace.

City has a game in hand and a much better goal difference than either of their rivals.

With a win at fifth-place Everton on Saturday, City would be hot favorites to repeat their title success of two years ago - possibly on goal difference once again.

The City supporters at Selhurst Park cheered news of Liverpool’s defeat and had further cause for celebration as Yaya Toure, returning from injury, made the first goal for Edin Dzeko with a perfect cross.

Toure scored the second, his 19th in the league this season, before halftime after a fine run from the halfway line.

“It’s in our hands again, but there have been so many changes over this season.”

Chelsea had beaten both its title rivals at home and away and despite missing five leading players through injury and suspension, Mourinho also rested others ahead of Wednesday’s Champions League semifinal second leg at home to Atletico Madrid.

Liverpool manager Brendan Rodgers, who once worked under Mourinho at Chelsea, accused his former club of playing defensively and having “two buses parked” in front of its goal.

But his team, which had won its previous 11 games to become favorites for the title, failed to make enough chances.

Philippe Coutinho wasted an early opportunity and Mamadou Sakho also missed the target, but Chelsea’s reserve goalkeeper Mark Schwarzer did not have a shot to save for almost an hour.

Just before the interval Liverpool captain Steven Gerrard slipped as he received a square pass near the halfway line and Demba Ba ran on to finish coolly.

Schwarzer, standing in for the injured Petr Cech, did well to keep out Joe Allen’s volley and pushed over a shot from Luis Suarez.

But the Uruguayan striker, favorite to be named Player of the Year by his fellow professionals later on Sunday, was generally controlled by a solid Chelsea defense and although the London side was pushed back for much of the second half, they still counter-attacked dangerously.

Goalkeeper Simon Mignolet had to save low down from Andre Schuerrle on one such break and in stoppage time Fernando Torres, once a Liverpool hero, set up Brazilian midfielder Willian to seal the win.

Chelsea was left to rue a shocking home defeat by Sunderland in their last game, the first time Mourinho had lost in 78 league matches at Stamford Bridge.

Had they won that game, they would now be top of the table and have the title in their own hands.

Chelsea’s remaining fixtures are against two relegation candidates, Norwich at home and Cardiff away.

Liverpool plays away to Crystal Palace and finishes at home to Newcastle, hoping that City will drop points in what has been a topsy-turvy Premier League season with their last two games at home to struggling Aston Villa and West Ham.

Rodgers refused to concede anything. “Manchester City has still got the games to play,” he said. “We’ll fight to finish as high as we can and see where it takes us.”