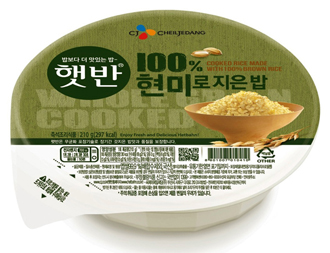 Whenever Ms. Lee, a 30-year-old office worker, goes grocery shopping after work, she never fails to put a few microwave rice products into her cart. It’s simple to eat, she said, especially for a single person like her.

“I rarely make rice at home,” said Lee, whose hometown is Masan, South Gyeongsang. She came to Seoul to attend college and to work.

“Cooking rice tends to be time-consuming, and oftentimes, I end up throwing away the leftover because the rice cooker that I have is for three to four people.”

She noticed one change, however. In the past, Lee said that she used to buy ready-to-eat rice packages made of white rice, but these days she brings home instant rice made out of different grains. She said they are healthier.

Meanwhile, it is the first time CJ CheilJedang has introduced a whole brown rice product, adding to its multigrain rice portfolio.

CJ’s move comes as demand for multigrain or wholegrain microwave rice has been rising.

According to Nielsen Korea, in 2011, the volume of multigrain microwave rice market was 6 billion won ($5.8 million). Last year, however, the volume more than tripled to 20 billion won.

“Consumers today are well aware of various adult diseases,” said an official from CJ CheilJedang. “They are also aware of how healthy consuming multigrain rice is. This year, we expect the market volume to reach more than 30 billion won.”

CJ CheilJedang is the largest manufacturer of microwave rice with a 64.4 percent share of the total 167.6 billion won market last year, according to Nielsen Korea.

Other players are Ottogi with a market share of 23.5 percent, followed by Nongshim (7.9 percent) and Dongwon F&B (2.9 percent).