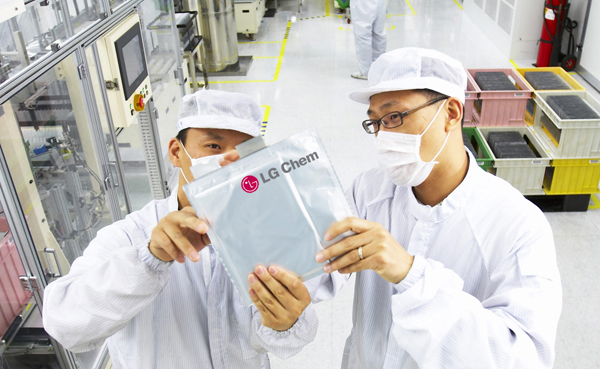 Employees work at LG Chem’s plant in Ochang, North Chungcheong, which has applied an energy storage system to save on costs. Provided by the company

LG considers focusing on energy solutions as vital for its future success. Combined with the information technology and home appliance industries, where the conglomerate dominates, energy solutions could be a new growth engine, according to LG.

LG’s affiliates are already collaborating to establish various energy solutions. Solar energy panels have been placed on the roof of an LG Display plant in Paju, Gyeonggi, while 19 other LG plants are awaiting the technology. When all the panels are activated, LG’s solar-powered network of plants will be the largest in the nation.

The energy from the panels will be provided to the surrounding areas of the factories to help reduce the risk of electricity blackouts in peak hours. They will also cut down on about 10,000 tons of carbon dioxide each year.

LG Chem is applying energy storage systems (ESS) to its plants in Iksan, North Jeolla, and Ochang, North Chungcheong. ESS allows energy to be stored at night or early in the morning, when electricity is cheaper, to use later in the day when electricity is more expensive.

According to the consulting company Navigant Research, LG Chem is the most competitive company in the ESS business. The two plants are expected to save 1.3 billion won ($1.24 million) every year.

LG is also No. 1 in the solar battery industry. LG Electronics developed a solar battery with a maximum 20.7 percent efficiency in 2012, breaking the highest record of 19 percent.

LG CNS, the IT convergence arm of LG, is also creating synergy in the energy-solution business. The company set up Micro Grid, a small-scale electricity system that usually operates with renewable energy, which works as a backup for the main power source, to the area near LG’s solar plant in Taean, South Chungcheong.

The new system was applied to the LG CNS data center in Busan, which is the largest in the nation. Although the building is five stories high with a space totaling 32,321 square meters (7.99 acres) - about the size of five football fields - the center only uses half of the expected electricity use for a construction of its size thanks to the technology.

In addition, LG’s mobile and Internet service provider, LG U+, has introduced a smart-building service. The U+ Smart-building Hotel Package is an integrated solution that not only provides communications infrastructure for phone calls or Internet use, but also manages individual hotel room charges.

Similarly, to reduce energy consumption, lighting systems in buildings and parking lots can be managed through this solution. An apartment-style factory in Hanam, Gyeonggi, used the solution and conserved 60 percent of its electricity, saving around 80 million won per year.

Moreover, LG has acquired 51 percent of Rolls-Royce Fuel Cell systems’ stake and launched LG Fuel Cell Systems in 2012. Fuel cells generate electricity from fuels’ electrochemical reactions, which is a more efficient method for generating electricity as it does not require fuel to combust, which causes energy loss.

According to the company, LG’s fuel cells will be released in the market in four years.

LG Chem’s factory in Ochang, North Chungcheong, is the largest producer of the car battery. It produces 200,000 electric car batteries worth 600 billion won annually. The battery serves 10 companies, including Hyundai, Kia, GM, Ford and Renault, and 10 more companies are expected to sign contracts with LG Chem. The company aims to become the world’s top electric car battery producer by 2015.

“We are quite confident because we have been investing in the latest technologies,” said Koo.