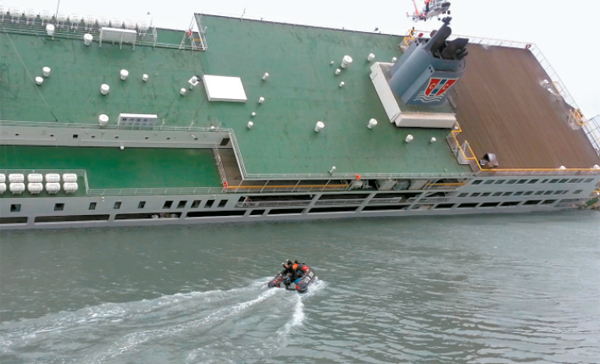 An inflatable rescue boat approaches the sinking Sewol on the morning of April 16 with a Coast Guard helicopter hovering above. The deck shows no passengers after the crew instructed them to stay put inside the sinking ferry, resulting in the country’s worst maritime disaster in decades. [NEWSIS]

The Coast Guard yesterday released a nine-minute video of rescue attempts when the ferry Sewol was capsizing April 16, showing the captain in such a hurry to abandon ship that he fled the listing vessel in his underpants.

But the top deck of the ferry is empty because passengers obeyed orders to stay below.

The video is meant to calm public anger about a rescue operation that only saved 174 of the 476 people on board by showing the perilous state of the ferry by the time the Coast Guard reached it.

But it’s likely to have the reverse effect as it shows the rescuers making no attempt to get inside the ship, where passengers - mostly 11th graders on a school trip - awaited their doom.

The video, which was recorded by a rescue worker on a Coast Guard vessel at the site, shows scenes of the rescue from 9:28 a.m., 36 minutes after the first distress call by a teenage student to the 119 emergency hotline, through 11:17 a.m., when the 460-foot-long ferry was fully capsized with only the tip of its hull sticking out of the water.

The nine-minute video has 49 scenes.

The sixth scene recorded at 9:35 a.m. shows one helicopter hovering above the Sewol, which lists at about a 45-degree angle. No one is on the top deck: passengers were instructed by the crew via loudspeaker to stay inside the sinking 6,825-ton ferry.

But 23 of the 29-person crew managed to be rescued.

The video shows the Coast Guard sending a rubber inflatable boat to approach the listing ferry at 9:38 a.m., six minutes after the vessel arrived at the sinking site.

Captain Lee Jun-seok is seen climbing off the heavily listed ferry into a rescue boat, dressed in only a shirt and underpants.

The video contradicts the disgraced captain’s claim to an investigation team that he was physically hurt and unable to save any passengers. In the video, he climbs steadily off the ferry and into the rescue boat.

In the nine-minute clip, Coast Guard workers are mainly seen helping passengers onto rescue boats. They are not seen on the ferry itself, where so many passengers were trapped.

After the video was released early yesterday morning, the Coast Guard arranged press interviews with four rescue workers in an apparent attempt to ease mounting criticisms over its rescue operation.

“We tried to get aboard the ferry to save passengers but could not because it was too steep to climb onto the boat,” said Sergeant Lee Hyung-rae.

When asked why they saved the ferry’s crew while hundreds of passengers were trapped inside, Lee said they could not distinguish crew members from passengers because they were wearing life vests, which obscured the uniforms they wore underneath.

That explanation, however, is expected to be derided, as five people shown in the video being rescued at 9:39 a.m. were dressed in identical blue uniforms.

As the public backlash only continues to grow, a joint prosecution-police investigation team raided the command center of the Mokpo Coast Guard and collected documents, transcripts and audio recordings to discover whether officials there took appropriate action on the day of the sinking.

The Mokpo Coast Guard has been under fire for a delayed response to the first distress call made by an 18-year-old student from the ship at 8:52 a.m.

At 8:54, the Coast Guard asked the student, who was surnamed Choi and whose body was found last week, for the latitude and longitude of the ferry. It took a total of four minutes for the Coast Guard to dispatch rescue ships to the site.

The investigation team also raided the headquarters of the South Jeolla Fire Department to collect documents and audio recordings to see if it properly responded to the distress call by Choi.

The fire department was the first to get Choi’s call, and it transferred it to the Mokpo Coast Guard.