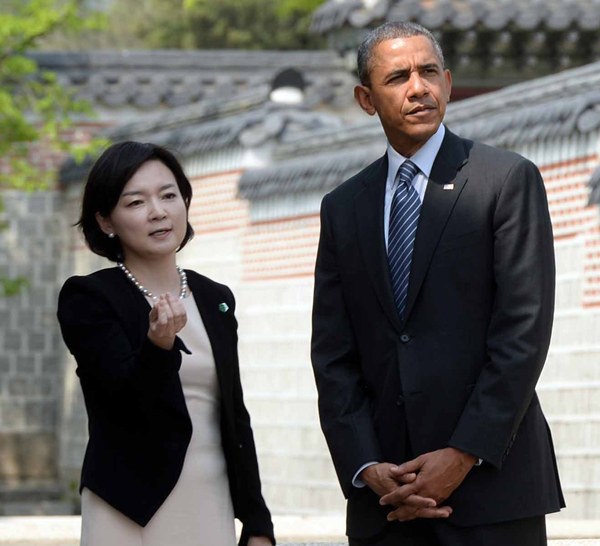 When U.S. President Barack Obama first arrived in Seoul on April 25, he toured Gyeongbok Palace, in central Seoul, where he was guided by Bak Sang-mi, 52, an international studies professor at Hankuk University of Foreign Studies.

When Washington requested a docent for the 30-minute tour in the months prior to the president’s visit, Korea’s Cultural Heritage Administration (CHA) recommended four candidates.

The United States ultimately selected Bak, who was informed of the news last month while she was on a business trip to the Unesco Headquarters in Paris.

After she returned to Korea on April 19, she immediately began preparing her explanations of the palace. Once prepared, Bak repeatedly visited the ancient residence to practice her routine and pondered how she would behave in front of America’s commander in chief.

“I seriously wondered whether I should smile at him or not,” she said.

To break the ice, Bak and Obama talked about their experiences at Harvard University, where they both studied around the same time.

In the early ’90s, when the president was a law student, Bak was working on her doctorate degree in cultural anthropology.

On April 25, when the two entered Geunjeongjeon, the main hall of Gyeongbok Palace, Obama put his hands together and listened to what Bak had to say. He addressed her as “professor” and asked questions.

They made their way back to the Sajeongjeon, which Bak explained was where the kings of the Joseon Dynasty (1392-1910) were debriefed on all kinds of reports that were documented in logs.

“It’s not simply a history of kings, but more a social history of the Joseon Dynasty,” Obama commented.

Coming out of the Sajeongjeon, the president asked about the nets under the eaves of the building. Bak answered that they were called busi - a word that sounds similar to the last name of former U.S. President George W. Bush.

“It is to prevent birds from coming under the eaves,” Bak answered, “because snakes might come up to hunt them.”

Once a specialist for CHA, Bak is currently a professor and the youngest ever member of the CHA’s world heritage committee and folk cultural asset committee. She graduated with a degree in anthropology from Seoul National University in 1986, and received her master’s and doctorate degrees from Harvard.

In line with her studies, she has worked on registering Korea’s cultural assets on the Unesco World Heritage List, and even led a project last year to inscribe the kimchi-making process.