Writer tells of stories of love and danger in train stations

Writer tells of stories of love and danger in train stations 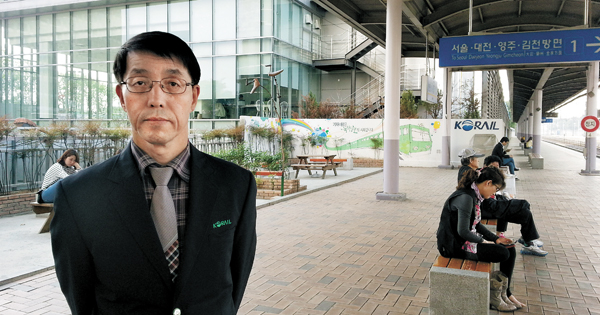 Park Hee-chae, the Daegu Station master and a storyteller who writes imaginative tales based on various train stops, stands in front of the station. Provided by Daegu Station

DAEGU - A train station is a place of greetings and farewells. Many stations are more than a century old, and each has its own sentimental story to tell, sometimes heartwarming, sometimes moving.

That is the message that 58-year-old Park Hee-chae, the station master of the Korea Railroad Corporation’s Daegu Station, has to deliver in the tales he writes about the train stops he has worked in over the years.

His stories, inspired by real stations in Korea, gained widespread popularity over the Internet after they were published in 2010.

The praise for trot singer Jin Sung’s 2008 hit “From Andong Station” can also, in part, be attributed to the writer’s success.

Park wrote two stories while he was working in his former position as a station master at Andong Station on the Jungang line. Located in North Gyeongsang, it opened in October 1930, while the Jungang line opened in 1942.

One of his most acclaimed tales, “Love Story of a Certain Station Employee Independence Fighter,” is inspired by two intertwined cherry blossom trees by Andong Station, near a five-story Silla Dynasty-era brick pagoda and a flagpole.

The story goes that in the years before Korean independence in 1945, a staff member at Andong Station spots a woman who faints as she gets off the train onto the platform. The man carries her to the station office, tends to her and then accompanies her to her home. Several days later, she comes to seek out the man at the station to thank him. They stroll along the path around the five-story pagoda, where they swear their love, and plant two cherry blossom trees nearby.

However, shortly afterward, the protagonist is revealed to be a member of a secret independence movement and is forced to go on the run when he’s sought by a high-level Japanese official.

“I created the story based on the fact that Andong produced the greatest number of independence fighters, with the setting including the intertwined trees,” Park said.

Kwon Oh, a former lawmaker in the National Assembly, apparently even mistook the story for a factual account.

“Shouldn’t we tell this story far and wide?” he once asked.

Park also wrote the “Honorary Station Master Dog” when he worked at Jeomchon Station in North Gyeongsang. The tale revolves around a dog that helps children who visit the station. Park was inspired to write the story while looking through local history books. While reading, he about the grave of a dog owned by Gen. Gwak Jae-woo (1552?1617), a patriot who led military troops in 1952 in defense against the Japanese.

Choi Bool-am, an award-winning actor, even heard about the story based on Jeomchon Station and admitted that he had been moved by it.

“A train station is a museum of memories shrouded in the people’s joys and sorrows,” Park said. “I want to let my passengers look back at the train and the train station one more time through my storytelling.”

His stories were first published four years ago by Korail’s North Gyeongsang Headquarters in the “Train Station Stories” collection.

Park has worked with the railway corporation for 32 years and published his first historical novel last year. When he finds the proper inspiration, he said he plans to write a story about Daegu Station.