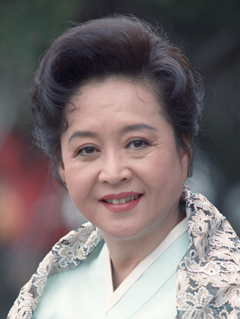 A celebrated veteran actress is suspected of being a close ally with the owner family of the beleaguered operator of the sunken Sewol ferry and holding executive positions in the operator’s affiliates as well as a religious institution linked to that family.

Kim Kyung-sook, better known by her stage name Jeon Yang-ja, faces a travel ban and is expected to be summoned for questioning over corruption allegations involving Yoo Byung-eun, the family’s patriarch, and his two sons, according to the Incheon District Prosecutors’ Office yesterday.

Born in 1942, Kim is a well-known actress and has appeared in more than 40 soap operas.

The ban is part of a widening investigation into allegations that Yoo committed financial irregularities to collect slush funds. A joint investigation team of prosecutors and police officers is currently focused on verifying whether the alleged misconduct contributed to the sloppy safety management of the Chonghaejin Marine Company, which operated the Sewol.

Prosecutors allege that Kim aided in misappropriating company funds while closely being engaged in the management of the family’s businesses.

The investigators of the Incheon office yesterday embarked on tracking down the bank accounts of the actress in order to examine any financial transactions connected to the Yoo family.

Kim is the head of a video production affiliate as well as a religious facility for a pseudo-Christian cult headed by the 73-year-old Yoo.

The production company, Kukje Yeongsang, appears to have close connections with the ferry operator, because Kim Han-sik, the president of Chonghaejin currently under interrogation, serves as an auditor to the production subsidiary.

The elder Yoo held a 28.8 percent stake in the video production company until 2009.

The 72-year-old actress serves as the president at an organic food sales affiliate and is registered on the board of directors of I-One-I Holdings, the operator’s holding company.

A staff member of the grocery store confirmed that Kim is the head of the store.

“She arranged food and products until January and showed up almost daily,” said the employee, who wished to remain anonymous. “But when she was working on a drama, she came here only once a week.”

Besides her business-related roles, Kim is also suspected of playing a key role in promoting a controversial pseudo-Christian cult led by Yoo. Prosecutors said that Kim is now the managing director of a religious facility called Geumsuwon in Anseong, Gyeonggi.

The complex is known to encompass various restaurants, shops and even an amusement park, services that are exclusively available for believers. Members of the religious group often gather there to pray together, and nonbelievers are banned from visiting.

Yoo is accused of forcing members to invest in the companies he and his sons operate.

The group came into the public eye in 1987, after Yoo was investigated over allegations that he was behind the mass murder-suicide of 32 religious believers.

At that time, he served as the minister of the cult.

Kim publicly admitted to being a devout believer during a press conference in 1991.

In the face of the allegations brought up against her, Kim denied any wrongdoing.

“I will participate in the questioning as frankly as I can,” she said on Monday.

“I have nothing to hide and I would not avoid any request for questioning by the prosecutors,” she added in an interview with the JoongAng Ilbo.

She has not turned up to film scenes for a drama in which she currently stars. MBC, the broadcasting company, said that it will make a decision on whether to drop her later.