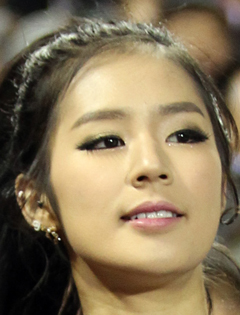 Since the April 16 Sewol ferry disaster, Korea Baseball Organization teams have turned off their music and removed cheerleaders from their ballparks.

While the nation remains shaken by the tragic loss of life, the KBO cheerleaders have lost their jobs for the time being and many are suffering from financial problems.

It may not be a huge issue for some popular cheerleaders such as Park Ki-ryang, the “Goddess of Sajik Stadium” in the southern port city of Busan who receives about 2 million won ($1,955) per month, but most cheerleaders are paid by the game.

For them, no cheering means no income. A cheerleader earns an average of about 120,000 won per game, according to Park. That translates to about 1 million won a month.

“I worry about those cheerleaders working under the daily pay system,” Park said. “Because they have relatively less career experience than me, it is harder for them to get other job opportunities.”

Instead oleading sheers at the ballpark, Park spends time at Enter Crew Communication, an agency that supplies cheerleaders for the Lotte Giants.

Park practices her cheerleading at the agency office in Dongnae District, but several of her colleagues are spedning their time trying to find part-time jobs.

The nine KBO teams employ a total of 74 cheerleaders, and since winter sports such as basketball and volleyball ended and football clubs in the K-League Classic don’t use cheerleaders, most of them are not able to make money elsewhere.

“Many pre and postgame activities and events organized by conglomerates were canceled,” said Bae Sang-hyun, manager of Nol Event, a promotion company. “Generally, April and May are the months when many universities organize school festivals and companies hold outings and field days to develop camaraderie and team spirit. Cheerleaders used to work these events when there were no games, but they are all gone now.”

After the disaster, KBO officials requested that all teams turn off music and not use cheerleaders until May 6, but the leag said the teams agreed to continue without them a little while longer.

The KBO said yesterday it will monitor how the rescue work progresses in order to decide on an appropriate date to resume cheerleading and music.

“We go to the ballpark every evening after practicing our performance, but we just sit there and watch games,” Park said.

“We are just waiting for our stage to be reopened.”