Verbal duel on nuclear test by North at the UN

Verbal duel on nuclear test by North at the UN 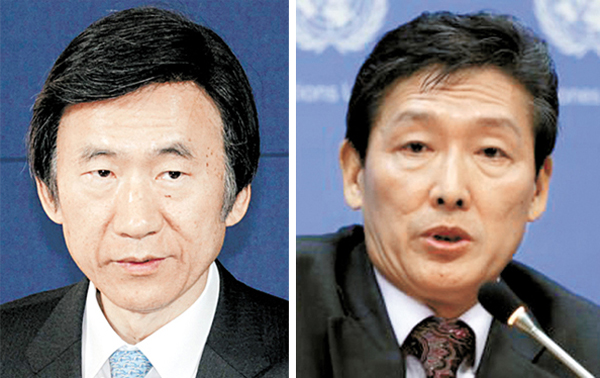 South Korean Foreign Minister Yun Byung-se warned Pyongyang of “the most serious consequences” if it continues with its nuclear program in an address to the UN Security Council Wednesday in New York.

But an unfazed Ri Tong-il, North Korea’s deputy UN ambassador, told the council that the Communist regime’s “missile launches and nuclear tests in the interest of self-defense will become annual.”

Resolution 1540 was unanimously adopted by the council in 2004 against the proliferation of weapons of mass destruction.

Yun called North Korea’s nuclear weapons program “the weakest link in nuclear nonproliferation, along with nuclear security and safety” and pointed out that North Korea is the “only country in the world that has conducted nuclear tests in the 21st century.” He went on to say that further nuclear tests by North Korea must be prevented, otherwise it will “critically weaken the credibility of the Security Council.”

Following Yun, Ri exceeded his time limit, speaking for 15 minutes instead of the allotted four before he was cut off. Ri said the United States is “the mastermind of the proliferation of nuclear weapons” and said that while Washington helped Israel acquire nuclear weapons, it only “increased nuclear blackmail” against North Korea. He also accused the United States of spoiling the North’s reunification overtures to South Korea by conducting military exercises with the South and keeping more than 1,000 nuclear weapons there. He was referring to the two-month-long annual joint military exercises conducted by South Korea and the United States between February and April.

At a press conference afterward, Yun said, “Currently, the most urgent issue in our diplomacy is blocking North Korea’s nuclear test.” He indicated that North Korea conducting another nuclear test could also be considered an affront to China, Pyongyang’s main ally.

Yun delivered a similar message the previous day in a speech at the International Peace Institute, saying North Korea “will have to pay the highest price, one that it has never experienced.” He also claimed that the North was ready for a fourth nuclear test “whenever they make the necessary political decision.” South Korea is the rotating president of the council for May.

The 15-member council issued a presidential statement expressing grave concern that nonstate actors may acquire and use banned weapons and urged full implantation of the council’s resolution. North Korea carried out nuclear tests in October 2006, May 2009 and February 2013, and appears to be preparing for a fourth despite prohibitions by the UN, increased international sanctions and multiple warnings by the international community.