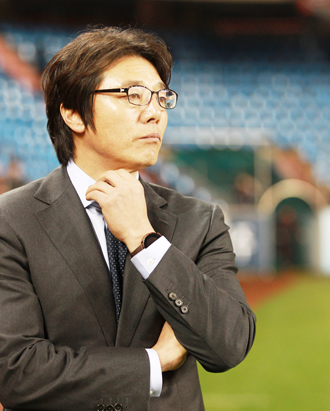 For Koreans, the 2002 Korea-Japan World Cup was one of the country’s most memorable and successful events as the Taegeuk Warriors finished in fourth place. As soon as the event kicked off, the national team led by Coach Guus Hiddink was on its game, overpowering Poland 2-0 in the first Group D match. Veteran striker Hwang Sun-hong scored the first goal.

He didn’t score again during the tournament, but fans and analysts alike praised his hard work and contributions to the team.

Hwang now coaches the Pohang Steelers of the K-League Classic. His team won the league title last year and is in first place this season with a record of 8-3-1.

Hwang sat down with the JoongAng Ilbo on Wednesday at Pohang’s home Steelyard and offered some advice to the 23 players on Coach Hong Myung-bo’s national team and best wishes for a successful 2014 Brazil World Cup.

Q. Let’s start with your team. It looks like the Steelers had an excellent start.

A. Our players have done such a great job, but that is all in the past and we have to move forward. I think many clubs will challenge us aggressively, so we have to prepare for that.

How would you score your season so far?

Between 70 and 80 percent. What people see is our place in the standings, but I’m satisfied more with our performance itself. Midfielder Lee Myung-joo and forward Kim Seung-dae [12 goals] have done a great job.

Lee Myung-joo has been one of the hottest players in the K-League Classic, but he wasn’t selected to the national team for the upcoming World Cup.

His football sense is one of the best in the league, for sure. He knows what he has to do for the team and doesn’t hesitate to sacrifice himself. Having someone like Lee is a blessing for a coach. He said in interviews the reason he wasn’t selected to the team was because he lacked the necessary abilities and that he will work to get to the next level as a football player. I think that with an attitude like, he will only get better for sure, and someday he will earn his chance.

There are many opinions regarding Hong’s roster decisions that included many familiar faces from his 2012 London Olympics team.

I support Hong 100 percent, and we have to trust his decisions, especially these days. I think the team will bring some good news to the nation, which has been in a sorrow for a long time due to many tragic accidents.

What do you think are the strengths of the national team, and where does it need to improve?

Compared to my generation, they already have experienced many big and small international events. But I want them to shake off all those memories because the World Cup is a whole different event that brings a series of unexpected situations. The key to success is to control the mind in such circumstances and do your best on the field with confidence. I think they are competitive enough to advance to the second round no matter how young they are, so I want to ask them to trust themselves. They are stronger than they think.

How do you see Group H [Korea, Russia, Belgium and Algeria]?

I think it will be an interesting challenge not only for the fans, but also for Coach Hong. I heard that the team’s goal is to advance to the quarterfinals and I think we can accomplish that if we make it to the second round. We have many good players with experience in European leagues. Once again, I want to ask them to play with confidence.

He has done so many great things for Korean football. I take my hat off to him for his contributions to the country. It seems a little early to retire, but I think he must have thought about it for a long time, so we should respect his decision.