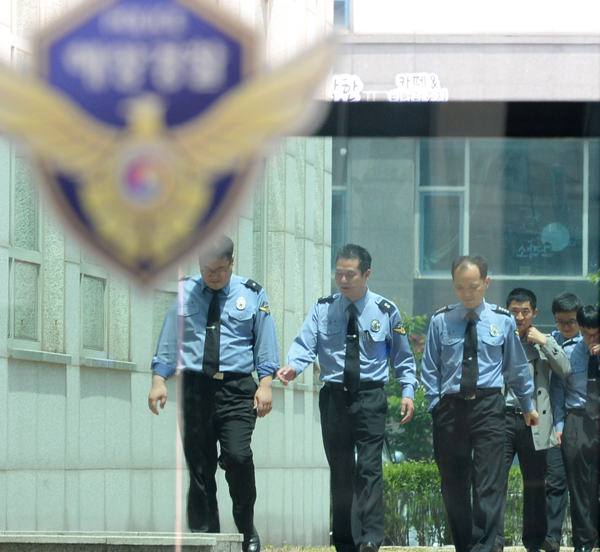 Coast Guard officials walk past their headquarters yesterday in Incheon. President Park Geun-hye said yesterday that she would disband the 61-year-old Korea Coast Guard for its incompetence during the Sewol ferry disaster. [NEWS1]

In a show of strong resolve to rein in the culture of collusion between public officials and the industries they regulate, President Park Geun-hye announced a set of sweeping measures yesterday aimed at fixing problems rampant in the public sector.

Since the sinking of the Sewol ferry on April 16, Park has emphasized rooting out the “bureaucratic mafia,” or “gwanfia,” a term coined by the public, who are appalled at rampant corruption stemming from dubious decades-old connections between the shipping industry and public offices ahead of the disaster. The word is a portmanteau of the Korean word for officials, “gwalyo,” and mafia.

“Closed culture and the collusion between government offices and the public sector has shown us what kind of calamity this has brought [as seen by the sinking of the Sewol ferry],” she said in her nationally televised address yesterday morning. “If safety ferry regulations and audits into the safety [of the ship] had been properly carried out, the crisis could have been avoided.”

Park pledged to end the vicious cycle of collusion that puts “the lives of people at risk,” noting that the practice is a chronic problem rampant in other parts of society as well.

To that end, Park said she will triple the number of private institutions in which retired officials will be prohibited from re-employment, which would likely prevent conflicts of interest with their previous career. She also said the government will ban retired government workers from being rehired in the private sector within three years of their retirement, a one-year increase on the current two-year limit.

Under the new measures, government officials will not be allowed to take jobs at state-funded institutions that manage business licensing and carry out audits for businesses or companies for which mutual interests may be at stake.

Park’s remarks on the deep-rooted gwanfia culture followed allegations that inappropriate connections between the Korea Shipping Association, a safety regulator, and Chonghaejin Marine Company, Sewol ferry’s operator, enabled the ship to pass safety tests despite being overloaded. Before sailing from Incheon en route to Jeju Island, the vessel was loaded with cargo weighing far more than its intended capacity.

In the past, retired maritime officials often landed jobs at shipping associations in what was long viewed as customary. Those organizations oversee and evaluate the safety standards on the vessels owned by ship operators like Chonghaejin.

Such associations are subject to government oversight. However, the Sewol sinking clearly demonstrated flaws in the government’s ability to oversee the industry. And many have since pointed to revolving-door practices, through which regulators and businessmen form cozy relationships and collusive ties, as a contributing factor in the accident, the country’s worst maritime disaster that has left more than 300 people dead or missing

The fact that 10 of the current and former chairmen of the Korea Shipping Association were retirees from the Ministry of Oceans and Fisheries fueled public speculation about shady practices.

In her speech, the president also said that the government will pursue changes to a stagnant government community, branding it a group with a “closed organizational culture.”

That community has often been accused of resisting change to avoid confrontation or controversy.

“In order to thoroughly reform public offices and bring an end to gwanfia culture, I will make the bureaucracy more professional and open to change from the point of recruitment all the way to officials’ retirement.”

To realize her goal, Park said she will introduce a recruitment system for top-ranking public officials in which half of new recruits will be those with relevant expertise from the private sector. If realized, the new recruitment measure will fundamentally transform how high-ranking government officials are hired and start their career.

For decades, the country has recruited Level-5, or high-ranking, government officials through an annual state examination known as gosi, which is viewed as the most efficient way to climb the social ladder. The coveted exam, however, has also been criticized for maintaining a tight-knit, exclusive club of high-ranking officials who are indifferent to reform.

Park also called on the National Assembly to pass legislation informally known as the Kim Young-ran Bill, which seeks to punish government officials for taking bribes for undue favor. The bill has been stuck at the National Assembly because the ruling and opposition parties have continued to disagree on the extent of punitive measures.

Park added that she was open to launching a special independent investigation by the prosecution if it is deemed necessary to determine the exact cause of the Sewol accident.