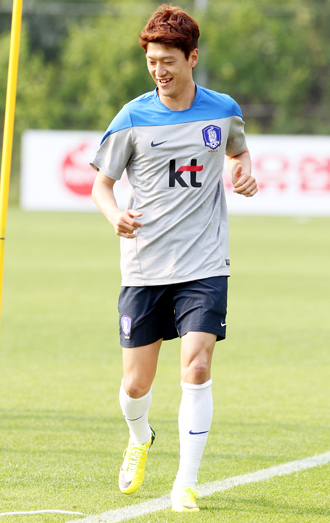 The World Cup is the ideal stage for players representing 32 nations to compete for the trophy and show off their abilities in front of fans, coaches and scouts for football clubs around the world as they vie for the attention of bigger clubs.

Out of the 23 Taegeuk Warriors who will compete in the 2014 Brazil World Cup that kicks off next month, Park Chu-young (Arsenal), Kim Bo-kyung (Cardiff City) and Lee Chung-yong (Bolton Wanderers) will want to impress because European leagues will be looking to sign new players in their offseason when the World Cup ends.

It’s not a secret that 29-year-old striker Park wants to find a new team to play for. He spent most of the past few seasons on the bench after he failed to impress Arsenal Coach Arsene Wenger, and the situation didn’t improve when he was loaned to Celta Vigo and FC Watford.

Park said he wants to keep playing in Europe, so he needs to perform his best in the World Cup.

Media outlets in Korea, England and even Belgium, one of the three nations grouped with Korea, doubted that including Park on the squad was a good idea, but he will get his chance to play because Coach Hong Myung-bo considers him the team’s best striker.

Lee and Kim’s contracts with their current clubs expire after the 2014-15 season. Many clubs re-sign or sell their players a year before their contracts expire, so there is a good chance that these two midfielders could to move to another club.

Lee has been loyal to his team, but since the Wanderers have failed to escape the Championship League, the league below the English Premier League, there is no reason for him to stay another year with them. Lee has been the ace of the Korean national team since midfielder Park Ji-sung retired from the team in 2011. He hasn’t scored many goals, but he controls the game tempo on the field and has created many scoring chances. It looks like the stage is set for the 26-year-old to perform because he is Hong’s first choice for right-wing in his 4-2-3-1 formation.

Cardiff City advanced to the Premier League this season from the Championship League but failed to avoid relegation. It is questionable whether Kim will stay with the team as it goes back down to the lower league.

On Monday, Kim was given the number 7 national team jersey, which used to belong to retired captain Park Ji-sung. However, it is questionable whether he will get enough playing time because he is considered a backup for either Son Heung-min or Koo Ja-cheol.

Ki Sung-yueng of Swansea City might also be looking to get picked up by a new team.

He was loaned to Sunderland at the beginning of the season and saw success there under Coach Gus Poyet. There are rumors that Poyet wants to acquire Ki after the World Cup, but new Swansea Coach Garry Monk also wants to keep Ki on his squad.

Some analysts say there is a chance for Ki to get lucky and be called up by a mid- to upper-level club in the Premier League, such as Tottenham Hotspur or Everton. Hong has guaranteed Ki a spot as one of two starting defensive midfielders.