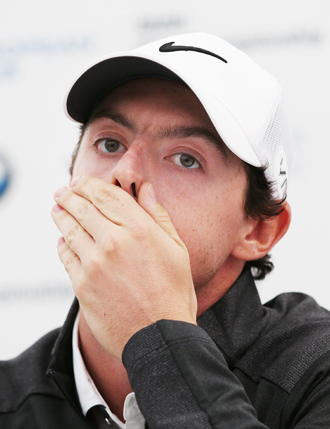 Sergio Garcia has been involved in two high-profile breakups during his career and is ready to provide a shoulder for Rory McIlroy to lean on following his split from fiancee Caroline Wozniacki.

World No. 10 McIlroy announced on Wednesday, the eve of the BMW PGA Championship at Wentworth, that he had called off his planned marriage to the Danish tennis player just days after the couple had sent out wedding invitations.

“I haven’t seen Rory since I heard the news, but when I do I will definitely put my arm around his shoulder and ask if he wants to talk about it,” the Spaniard told reporters.

“I’ve been through the same sort of thing a couple of times. I broke it off with Martina, but Morgan was the one who left me. And, of course, how you react is different.

“When you are the one who leaves someone you can usually get over it quicker. But either way, it is always a hard thing to do when you have been with someone for a long time, for a period of years, and shared so much together,” added Garcia.

“It should be easier if it is mutual, but when it is a really painful breakup you try to get away from it by throwing yourself into golf more than ever, and it doesn’t always work out. It’s not easy to concentrate when something like that is still on your mind.”

Garcia’s golf took a nosedive when Morgan-Leigh ended their relationship, and he was forced to take a brief break from the sport.

“Every case is different, but for me the hurt of the breakup was one of the reasons I felt I had to stop playing the game for a while,” said the world number seven who, like McIlroy, is one of the favorites in the European Tour’s flagship event that starts on Thursday.

McIlroy, 25, said he ended his two and a half year relationship with Wozniacki because he simply was not ready for marriage.

Asked if it was more difficult for celebrity couples, Garcia replied: “I don’t think so. I think if a relationship is strong enough it shouldn’t make a difference if both people are famous.”

U.S. Open champion Justin Rose, another Ryder Cup teammate of McIlroy’s, said he was surprised to hear the news of the breakup.

“There are hearts involved,” said Rose. “Better now than in two years’ time.”