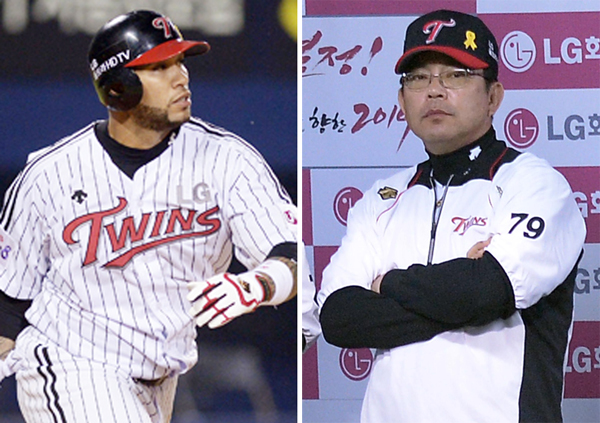 The LG Twins have now spent more than a month at the bottom of the Korea Baseball Organization. The Twins said they will never give up hope on making the postseason for the second year in a row, even though they are seven and a half games behind the league’s fourth-placed Nexen Heroes.

Under the new leadership of Yang Sang-moon, who replaced former Manager Kim Ki-tae earlier this month, the Twins have become a better team in the past week, going 5-3 in the past eight games. But Yang will face his biggest challenge yet in the upcoming three-game series that kicks off today at the Twins’ home in Jamsil Stadium as they play the league-leading Samsung Lions, who have become the scariest club in the league over the past month with an 11-game winning streak.

The upcoming series could decide the future of the rest of the season for the Twins. If they win the series against the roaring Lions, it will give the entire team great confidence that they still stand a chance of making the postseason. But if they finish the series like the Heroes did over the weekend, they could statistically end up 10 games behind the fourth-placed Heroes. In the past decade, none of the clubs that were in last place at the end of May advanced to the postseason.

When Yang began, he didn’t hesitate to restructure the team. A day after he became skipper, Yang put Futures’ League team (equivalent to the minor league) Manager Kim Moo-gwan, who was the team’s hitting coach until last season, back in his old position and also brought in Son In-ho, a minor league team hitting coach, to help Kim.

“We relied too much on veteran hitters such as Park Yong-taik, Lee Byung-kyu and Lee Jin-young earlier in the season,” Yang said. “I wanted to improve the batting lineup’s balance so that veterans and young prospects could bring something together, so I decided to bring in the two who know our hitters more than anyone.”

It might be too early to say that the decision was right, but since the return of the hitting coaches on May 13, the young hitters mostly batted at the bottom of the lineup - Kim Yong-eui has hit .421 and Oh Ji-hwan has hit .304.

But the key to the Twins’ offense is their U.S. import Josh Bell, who was the most effective switch hitter in the batting box in April with a .308 BA and league-leading eight homers with 18 RBIs and .593 slugging percentage. However, this month he hasn’t hit a home run and has only hit .262 and 12 RBIs and his slugging percentage dropped to .311.

“Since the team struggled in scoring, we heavily relied on some particular hitters including Bell,” Yang said. “He must have been very tired because he had to play six games every week and the team didn’t give him enough time to rest.”

Bell took the day off on Saturday and then hit a two-run double in four at bats against the SK Wyverns on Sunday. Though Bell hasn’t hit a home run in May, he is still the team leader in home runs. His teammate, infielder Jung Sung-hoon, has hit four and outfielder Park Yong-taik has hit three. Their 26 team home runs have them tied at last place with the Hanwha Eagles.

In order to improve the pitching, the first thing Yang did was to use 34-year-old veteran Choi Kyung-chul as the starting catcher rather than Yoon Yo-seob, 32.

“Choi is better at preventing runners from stealing bases, which makes a huge difference to pitchers,” Yang said. “The catcher must be capable of making accurate throws to second because it is impossible to reduce steal attempts only by pitch outs and pick offs.”

“It will take more time to get back into our best shape, but the series with the Lions is very important for the rest of the season,” Yang said. “We will only think about making it a winning series.”